Situated close to the entrance gate of Cardiff Castle, the Goat Major is a three-story building decorated with black timber beams and white plaster in the style known as Brewers' Tudor. In the summer hanging baskets bloom above the pub name and help make this part of the High Street look attractive.
The pub was originally known as the Bluebell and dates from 1813, it was renamed the Goat Major in 1995. The name is taken from the corporal in charge of the mascot of the Royal Welsh Regiment, formed by the amalgamation of the Royal Welch Fusiliers and the Royal Regiment of Wales in 2006. The tradition of having a goat as a regimental mascot occurred during the Crimea War.
The central doorway leads to an entrance hall and a long, curving bar room leads off here. The bar is impressive with dark wood and gleaming brass foot and hand rails contrasting nicely. This is matched by an equally impressive tilled floor with red, black and cream vitreous tiles shining in the light. The Goat Major is wood-panelled throughout, with dark-green leather seating arranged along the sides of the pub. Photos of the Regimental mascot adorn the walls. 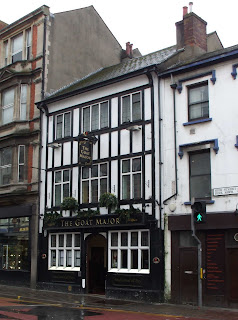 Being a Brains pub, the beer range is Dark, SA, Bitter and SA Gold as well as a guest beer such as Timothy Taylor Landlord or Fullers. The previous guest beers have their pumpclips displayed behind the bar and include Brewdog, Brewster's, Springhead and Cameron's, to name a few. It comes as no surprise that the Goat Major is in the CAMRA Good Beer Guide and has also achieved the Cask Marque award. Bottled cider from Gwynt Y Ddraig is also available. The pub is shortly to have fitted a stillage behind the bar so customers can have a pint served straight from the barrel if they wish.
The pub has an innovative and changing menu, with homemade food available 12-6 Monday-Saturday and 12-4 on Sunday. Last year the Goat Major pub won an award during British Pie Week for one of its pies. Other items on the menu include rustic cobs with Welsh cheese, wild game pie and homemade lamb cawl.
The Goat Major is well worth rediscovering, a centuries-old city centre pub that offers a good choice of real ales and good pub food, in a traditional atmosphere.