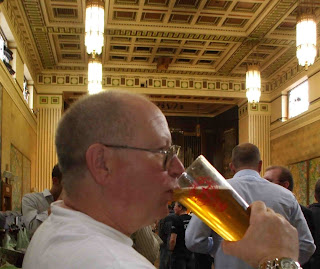 Good coverage in the Daily Mail and ITN News on beer being good for you. Of course it is something we all have known for years, though with the bansturbators from Alcohol Concern and Alcohol Concern Cymru (funded by the Welsh Assembly Government to the tune of £250,000). Report was commisioned by the Beer Academy.

The study says beer is a rich source of vitamins, fibre, minerals and antioxidants and has a relatively low calorific value compared with many other alcoholic beverages.

Well that's a relief then, right off to lunch for a rich source of vitamins, fibre, minerals and antioxidants!

Labels: beer is good for you

"13% incorrectly believe that beer is made from chemicals rather than malted barley and hops."

Maybe because that's what certain sections of CAMRA have been telling them for years ;-)