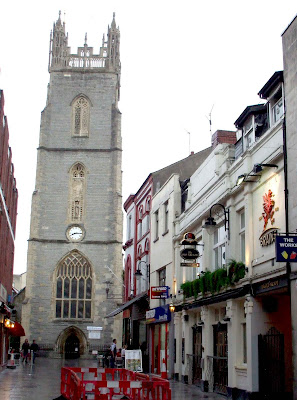 Old Arcade, 14 Church Street, Cardiff, CF10 1BG
One of Cardiff's' most famous pubs, the Old Arcade stands in the shadow of St John's Church and adjacent to the market. The present building dates from 1844 and it was originally called the Birdcage Inn, the Arcade & Post Office and then the Arcade Vaults but there is a building on this site marked on the John Speed map of 1610, so this Victorian building may well have roots going back over four hundred years. The Old Arcade features a frontage on Church Street and an alleyway leading to the market on the side, both with the distinctive Brains logo hanging outside. In the alleyway, the windows of the pub are worth looking at as they feature etched glass legends such as 'Brains Beer' and 'Luncheon Bar'. Being a City Centre Brains pub, the Old Arcade offers six real ales, all pulled from the brick-built cellar by handpumps with distinctive red ceramic handles decorated with fleur-de-lys. The real ales served are Brains Bitter, Dark, SA Gold, SA, Reverend James and a guest ale from an independent brewery. 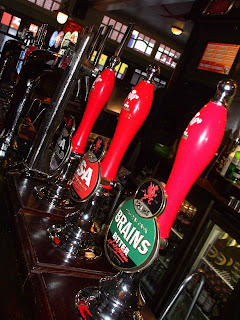 The front bar of the Old Arcade is spacious with plenty of tables, this room was altered in 1995 to create more seating. Before this the bar was closer to the door. Around the walls are signed rugby shirts in frames, showing that the Old Arcade is a popular destination on match days. Flags from most rugby playing nations are pinned to the ceiling, which help create a vibrant atmosphere on match days.
Behind the rear fireplace is another room, accessed by passageways either side. This backroom has more original features including another bar, this time with a dark mahogany bar back with etched mirrors fitted into it. This creates a lot more light in the bar which, would normally be quite dark as it faces the alleyway to the market. At the very back of the pub is a heated outdoor smoking area, which features an old pub sign from the Old Arcade that was based on an old drawing of Church Street from the 1850s.
Food is served 11.30-6 (4.30 Sunday) and features choices from an extensive menu, though it is advisable to find a table early as the Old Arcade is a very popular lunchtime venue. This pub manages to combine features from the Victorian period with twenty-first century functionality and manages to pull them together to create a vibrant City-centre bar. 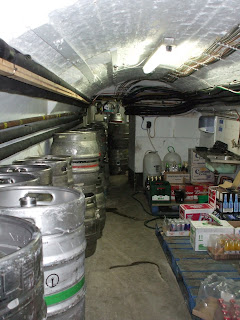 Above: the cellar of the Old Arcade
The Old Arcade is one of only one hundred Welsh pubs to be featured in a new book by CAMRA, the Campaign for Real Ale, called the Real Heritage Pubs of Wales. This book, in full colour and illustrated with photographs throughout celebrates the most unspoilt pubs in Wales with historic interiors and is available to buy at the bar.

had some great times in the Old Arcade. More city centre pubs should be like this!