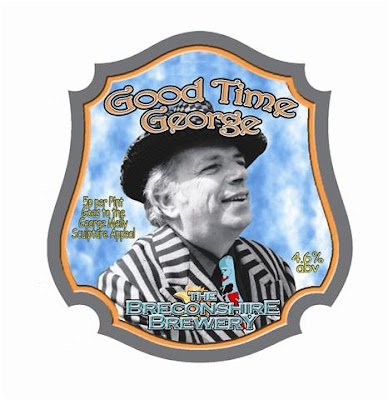 The Breconshire Brewery will be releasing a new special commerative ale, in association with the George Melly Sculpture Appeal  - Good Time George, at local beer festivals next week including the Great Welsh Beer & Cider Festival and at the Star, Talybont on Usk.
In addition the beer will be available at the Brecon Beer Fest on the 2-4th July in the Boar's Head, Brecon.

George Melly has been described as the flamboyant 'Oscar Wilde of English jazz'. He was also the first musician to be contracted by Brecon Jazz for the 1984 festival and remained a loyal and inspirational performer and supporter until his death in 2007. He was instrumental in setting up the Jazz Festival and served on its committee, as well as being involved with the Contemporary Art Society for Wales. A Surrealist flâneur, an incisive critic, broadcaster and raconteur, George was a vivacious entertainer in outrageous suits.  He had a passion for surrealist art and fishing and wrote extensively on both subjects. He was first inspired to sing on was hearing a recording of Bessie Smith singing Gimme a Pig-foot and a Bottle of Beer. Now Goodtime George has his own beer brewed in his adopted home town of Brecon.
The George Melly Sculpture Appeal was set up in July 2008 at the 25th Anniversary of Brecon Jazz Festival. Their aim is to commission a sculpture which commemorates George Melly’s relationship with Brecon. Please get in touch at www.georgemellysculpture.org.uk (Registered Charity Number : 1130174). 5p from every pint sold will be donated to the Appeal.
This commerative Ale is brewed with water drawn from under the hills of the surrounding Brecon Beacons National Park, and blend of pale, wheat and chocolate malts, all from Warminster’s traditional Floor Maltings, which give this beer its rich, dark colouring and velvety smooth texture.
This 4.6% abv commerative ale is a rich, tawny colour, with a smooth, complex flavour - full of character and extremely pleasing - much like the man himself…
Casks of this beer will be available from the beginning of June for the summer, either direct from the brewery or from selected wholesalers. More details can be found at www.breconshirebrewery.com, or by telephoning the Brewery on 01874 623 731.
Breconshire Brewery
Ffrwdgrech Industrial Estate, Brecon Powys, LD3 8LA
Tel : 01874 623 731             Fax : 01874 611 434

Bless him.
Want a pint of this.
5p a pint doesn't sound like much (assume a few people will buy the beer, based on his name alone) but I suppose it all adds up.
Thanks for the post.