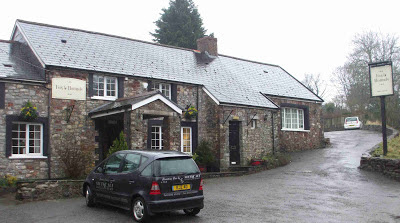 The Fox & Hounds is situated on the northern outskirts of Llanharry village, set back from the main road, with an useful bus stop outside for the Bridgend-Talbot Green service. Alternatively there are car parks to the front and sides of the pub. 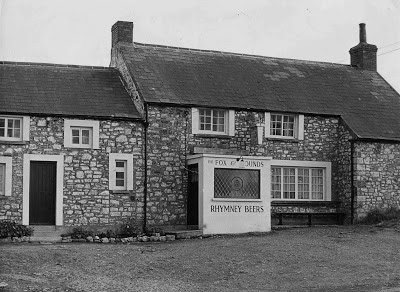 Above: the pub in the 1960s when it was owned by Rhymney Brewery, note the Ely Brewery logo in the window, Ely was taken over by Rhymney in 1959

The pub was formerly owned by the Ely Brewery of Cardiff, then Rhymney and Whitbread Breweries before Enterprise Inns took it over. It was sold at auction in 2011 and it is now a free house. There has been a building on this site for many centuries as a couple of the doorways are likely to date from Tudor times. An even older drinking connection was found near to the pub in the 1920s - a beaker from a burial dating to around 4000 years ago. The pub has been added to and extended over the years so much that only traces of the original building are discernible in the pub we see today. The building is built out of the local iron-rich limestone that has an unusual pinkish-red tinge. The village was once home to one of the few iron-ore mines in Wales.

The entrance is via a central porch which immediately leads to the stone-flagged bar area and light oak bar counter. To the left of the bar is the restaurant area which features an etched glass partition with foxes and hounds on the glass panels. This leads through to the beer garden with swings and benches. 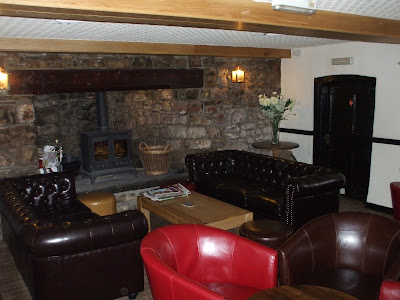 The bar features four gleaming brass handpumps which feature an ever-changing range of real ales from breweries such as Otley, Dark Star, and Wye Valley. Otley Brewery of Pontypridd is the most regular brewery featured on the bar with O3, O-Rosie, Croeso and O4 all featuring on the pumps soon. There is also an extensive wine list and a good range of whiskies, including Penderyn.

Food is served all day, apart from Sunday when its served 12-4 and for which booking is advisable. The Fox & Hounds features an extensive menu with home-made pies and locally-sourced ingredients are used wherever possible. Chalkboard menus in the dining area show what daily specials are available.

The pub holds a quiz night every other Sunday.