Best pub in Newport for sale 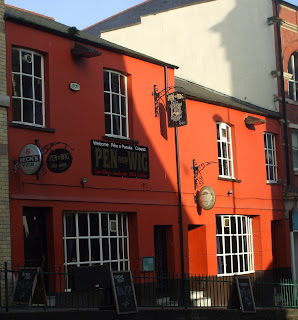 The Pen & Wig in Newport is for sale with Sidney Phillips for £397,500 freehold. Not sure if that includes the website written in Comic Sans or not. Current leaseholder Richard Jackson has had enough of the trade and the high business rates charged by the council for a thriving business in what is the ghost town of Newport and owner Billy wants to spend his retirement in Spain, not dealing with his pubs. Over the past 2 years Richard has built the Pen & Wig up to be the premier pub in Newport with a fine range of real ales and ciders, and, of course being a great local outlet for Tiny Rebel Brewery amongst others. Also Richard has cleaned up the pub a lot, banning dozens of people for their behaviour or just being chavs, giving more profit to Tim Martin and Chaverspoons in whose pubs these people now reside.
The building needs some work on it, probably about £40k to bring it up to standard so the £397k price is over-optimistic to say the least. Still at least it has a few things going for it - a large car park at the rear, upstairs bar and City Centre location. Just wait and see if anyone is willing to invest in City Centre Newport as neither shops (Marks & Spencer have left the City Centre) or the Council want to invest.