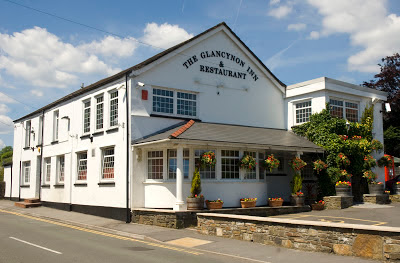 The Glancynon is situated on the main road through Hirwaun, close to the bus stops or alternatively the pub has a large car park. The pub is marked on the 1877-86 map and next door was a china shop, which was much larger than the pub as old photographs on the walls of the pub show. Today the Glancynon Inn has expanded into that shop and beyond with extensions built in the 1970. The Glancynon has been in the same ownership over 40 years and the owner is also a founder of Penderyn Distillery.

The entrance today is from the car park rather than the street as is shown in the old photographs. The entrance hallway leads to a lounge to the left and the bar straight ahead. There is also a separate restaurant. Both the lounge and the bar feature gleaming copper-topped bars and contrasting brilliant chrome handpumps. The bars also feature tiled roofs, a once common feature of 1960s/70s pub refurbishments. Decorative wooden beams also feature throughout the pub.

Five gleaming chrome handpumps serve real ales from breweries such as Greene King, Felinfoel and Wye Valley breweries with regular guest beers making an appearance. Spirits from the nearby Penderyn Distillery are also available, in fact the idea for the distillery was borne in the pub and the lounge features a 'Founders Corner' dedicated to the distillery.

The public bar features a section devoted to RAF pictures as well as a trophy case full of awards the pub teams have won over the years. Old brewery memorabilia also features on the walls. This rear section also features a pool table and an extensive library with subjects ranging from architecture to the CAMRA Good Beer Guide, in which the Glancynon Inn has featured for years. There are doors to the side of the pool table that lead to an outside area with tables and chairs which is named 'The Smokers Paradise'.

The Glancynon Inn has teamed up with Accessible Wales and the pub features ramps and handrails throughout together with a mobility scooter park and disabled toilet.

Food is served 1200-14.30 and 1800-21.30, not Sundays when booking is advisable for lunch. Local ingredients are used wherever possible and there are extensive printed menus, a braille menu, a menu for children and chalkboard specials.