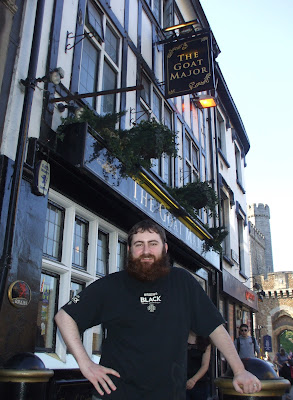 
A Cardiff pub manager has swapped pulling pints for brewing pints after spending a day in Brains’ craft brewery.

Chris Rowlands, award-winning manager, beardwrangler and piemaster general of the Goat Major – one of Cardiff’s best loved real ale pubs – turned brewer after Brains invited him to brew his own beer in their craft brewery.
Chris, a lifelong real ale fan, along with a team from the pub, chose to brew a milk stout, he said:

“The day was fantastic! I've always considered myself a bit of a beer nerd but when I went down there I realised just how little I really knew of the process of making beer I'd so often taken for granted.
We named the beer ‘Beardface’, my wife's nickname for me, loosely based off the fact that I look like a lumberjack stuffed into a waistcoat. “ 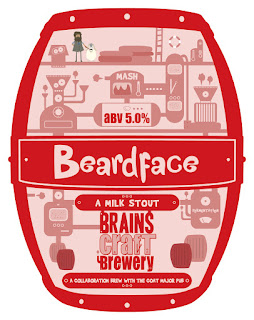 A milk stout is basically a standard stout brew with sugar from milk or cream added, the science behind this being that brewers' yeast cannot ferment lactose sugars so the natural sweetness and richness remains and provides a nourishing, potent counterbalance to the bitterness of a roasted malt. Brains used 5 different malts and a roasted barley to give the beer a layered depth of flavour and a truly nourishingly rich and resplendent pint of stout.

Blending Pale Ale, Munich, Crystal, Brown and Chocolate Malts with Roasted Barley, Beardface is a dark beer with a rich depth. Flavours of caramel, burnt toffee and roast coffee are balanced by the sweetness from lactose sugars, creating a sweet milk stout.
Bill Dobson, head brewer at Brains, added:
“Last year the Goat Major was named ‘Brains Cask Ale Pub of the Year’ at our annual awards ceremony, so we were keen to get Chris and the team in to brew with us. They’re knowledgeable and passionate about beer, and they pass on that passion to their customers.”
The beer will be sold in 30 Brains pubs and launched at the Goat Major pub on Wednesday 20th March at 1700hrs.