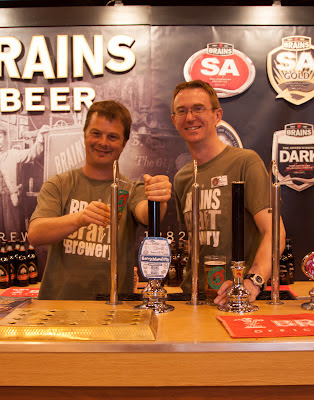 
Beer enthusiast Simon Martin, known to many as You Tube beer reviewer ‘Real Ale Guide’, has created a beer with Wales’ best loved brewer.
Simon, more used to reviewing beers, turned brewer after Brains invited the Barry resident to brew a collaboration beer in their new craft brewery. After deciding on an American style IPA, and having chosen malts and American hops Summit, Zeus and Cascade, Simon clocked in at 6am one morning to start brewing with head brewer Bill Dobson.
The result is Barry Island IPA, a pale coloured ale bursting with citrus aromas. It was unveiled at the Great Welsh Beer and Cider Festival in Cardiff on Saturday 9th June and sold out before the day was over. It will now be sold for a limited time only in 30 Brains pubs from June 18th.
Over the past three years Simon has become Europe’s largest craft beer reviewer on YouTube, having reviewed hundreds of beers from all over the world.  He added: “I’m a huge Brains fan and was honoured to have been asked. It was a fantastic day and one I’ll never forget. My grandfather, who has been drinking Brains for 62 years, can’t wait to sample it at our local, the Tynewydd in Barry.”
Barry Island IPA will be on at the Tynewydd Inn Barry, 5pm on the 19th June, and Simon will take customers through a taste tour of his beer.
Barry Island IPA was only the third beer to have been brewed in the new 10 – 15 barrel craft brewery, which launched last month. The new 10-15 barrel craft brewery runs alongside the existing plant but means Brains – famous for the award winning SA Gold and the legendary Dark – can now also brew a diverse range of craft, cask, keg and bottled beers.
Head brewer Bill Dobson explains: “The beer market is always changing and there’s a growing interest in more diverse beers and different beer styles. Brewing on a much smaller scale means we can respond to demand by experimenting with limited editions and one-offs.”
To see Simon’s reviews, visit You Tube. You can also find Simon on Facebook (Real Ale Guide) and Twitter @RealAleToday

TASTING NOTES
Created by Simon Martin, aka Mr Real Ale Guide, this India Pale Ale was inspired by the ‘IPA revolution’ across the pond. The boy from Barry has used a trio of hops from the US in this pale coloured ale, which is bursting with citrus aromas. A unique smooth malt taste upfront is finished off by a vigorous bitterness and a ‘tidy’ clout of citrus and berry hop flavours.