Although only open to the public for three days, the Great Welsh Beer & Cider Festival is culmination of months of meetings, emails and phone calls as well as our staff being on site days in advance of the Festival opening. When we open its always a hard choice to choose what to have to drink so this is a personal look at what I'm looking forward to drinking at Wales' biggest pub.

I've already had a sneak preview at Brains Brewery of the two new beers from their Craft Brewery and I'm well impressed with both of them, pale hoppy IPAs which are sure to go down well with our customers. I'm also glad to see the return of British Summer – this was one of the favourite beers for me at the Festival last year and I was disappointed that it sold out so fast in their pubs as I never had the chance to try any after the Festival! Have waited a whole year for this beer to return!

Next up on my list to try will be beers from the Tiny Rebel Brewery of Newport, having only sampled a few of their beers before it will be good to see the full range on and I can't wait to try the Urban IPA served via their Hop Rocket, a dry hop chamber attached to the handpump that infuses even more hop flavour into the beer. 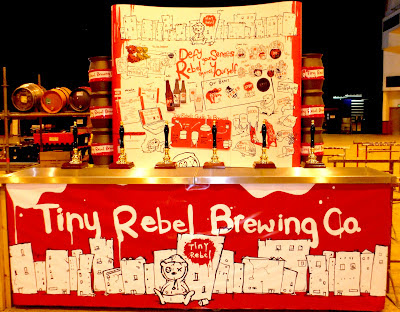 As you might gather from this, I'm someone who does like his hops! I'm not a fan of beers where the brewer believes in the homoeopathic method of brewing by just waving a few cones at the copper! But with all these beers and the various styles to choose from I suppose I'll have to move on from IPAs to a black IPA! Yes the Otley Brewery will be at the Festival again with their stunning beers including the Oxymoron Black IPA – a delicious dark chocolatey hoppy ale.

Okay enough of the IPAs, what about a bitter, light in ABV and yet full-bodied and packed with flavour? The 3.8% Hobby Horse from Rhymney Brewery is one such beer and one I always drink in  one of their pubs.

For something a lot different, one beer I must try is the Chilli Plum Porter from the Waen Brewery, at 6.1% this may be one beer to finish the night on! Another beer which is making a very rare appearance this far South is Mwnci Nell from Conway Brewery, a beer that went down well with the Editor of Croatian Playboy Magazine at the GWBCF a couple of years back!

Every year we choose a region of the UK to source our non-Welsh beers from and this year the beers will be from Yorkshire. One of my favourite breweries will be at the Festival, the Acorn Brewery of Barnsley who, as well as producing one of UK's greatest bitters, Barnsley Bitter, also brew Gorlovka Imperial Stout, a simply stunning stout but at 6.1% another one to try later in the day rather than start off on.

Another stunning Yorkshire beer is Pale Rider from Kelham Island Brewery and we have the old favourite Landlord from Tim Taylor's Brewery as well as a very rare appearance for their Dark Mild.

There are beers there for everyone's taste and if Wales or Yorkshire are not to your liking then why not try our foreign beers from the Czech Republic?

I'll cover the ciders and perries in another post later this week.