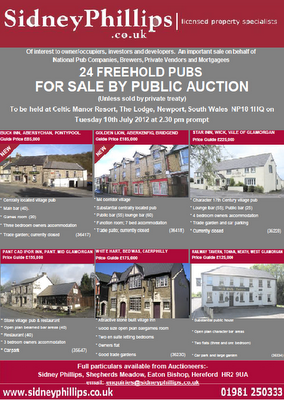 Another pub auction coming up at the Celtic Manor on Tuesday 10th July. In the last auction earlier this year most of the pubs were sold before the auction so it will be interesting to see what happens at this one.
Full details are on the Sidney Phillips website. NB Information below may be out-of-date in the run up to the auction so check their site not this one! Last update 09.07.12
Auction catalogues can be downloaded from the Sidney Phillips site here (pdf) 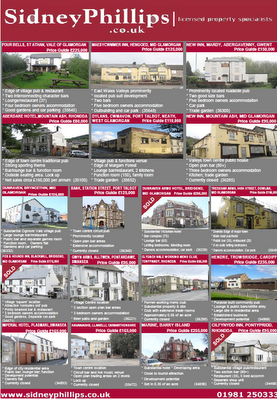 Buck, Abersychan, Pontypool, Torfaen, GP £85,000
Main, bar, games room and a trade garden, this pub seems to have everything going for it. On a main road as well. There is a lot of local competition from nearby pubs though.

Golden Lion, Aberkenfig, Bridgend, GP £185,000
Public bar, lounge, function room, trade patio for the smoking solution, 7-bed accommodation, another pub that seems to have everything going for it.

Pant Cad Ifor, Pant, Merthyr Tydfil, GP £195,000
Bar area and restaurant, car park, outside area for smokers. Another gem of this sale, don't be put off by the Merthyr address, this pub has had a reputation for good food and beer in the past. In fact its in an almost rural location with the remains of Morlais castle nearby.

White Hart, Bedwas, Caerphilly, GP £175,000
Punch Taverns
Open plan but with trade gardens, this is an attractive looking stone-built pub. The pub was forced to close earlier this year by a court order because of disorder at the premises which included underage drinkers using the beer garden and noise. Or 'a popular community local' as its often described as.

Four Bells, St Athan, Vale of Glamorgan GP £225,000
Two bars and a lounge/restaurant, car parking and large gardens. One of only two pubs in the village, this place has potential, although with the downsizing of RAF St Athan there may be an effect on trade. Still there is potential there.

New Inn, Mardy, Abergavenny, Monmouthshire, GP £150,000
Two bars, roadside location, car park, outdoor drinking/smoking area. Another pub with a lot of potential – its situated on the outskirts of Abergavenny and there are plans to build another 300 houses nearby. Seem to remember it has been opening on restricted hours for the last few years – its been closed the last few times I've been past it anyway.

Aberdare Hotel, Mountain Ash, GP £80,000
Third time in in a year this pub has been to auction. Guide price for this pub was £170,000 in the August '11 auction and £110,000 in the March '12 one. Bar/lounge and function room as well as an outside area. Net sales of what where claimed to be £200kpa have been knocked down to £160kpa. An attractive frontage to the pub, though the pub was described to me by one visitor as being 'rough as fuck'.

Dylans, Cwmavon, Port Talbot, GP £110,000
Lounge bar/restaurant, function room, family room, trade garden. Seems to have everything going from it, apart from the fact it looks like it was built as a WWII bunker.

Dunraven, Bryncethin, Ogmore Vale, GP £125,000
Public bar, games room, function room, lounge/restaurant, car park and gardens. Another pub that seems to have everything going for it.

Tredegar Arms Hotel, High Street, Dowlais, Merthyr Tydfil, GP £165,000
Situated on the main road, the Tredegar Arms features a bar and restaurant as well as  8 en-suite letting rooms and a car park. Always found the place to be a quiet in recent years.

Clydach Vale Workingmens Club, Tonypandy, GP £85,000
0.56 of an acre, the club is currently closed so it looks like a development opportunity here.

Hendre, Trowbridge, Cardiff, GP £235,000
SA Brain
Built around 1971 and looking like it, this estate pub features a lounge, public bars, skittle alley and is being advertised as with 'development potential'.

Imperial Hotel, Plasmarl, Swansea, GP £165,000
Public bar, lounge bar and function room, being advertised with 'development potential'. Looks like there is no smoking solution apart from the street.

Kavanaghs, Llanelli, GP £165,000
GP £160,000 in March '12 auction, was withdrawn from the sale, but it looks as if that fell through and its up for auction again – with an increase in the guide price. 'Circuit bar and live music venue...open-plan. Sounds like a delightful venue!

Marine Hotel, Barry Island, GP £255,000
SA Brain
Once part of a much larger hotel, this 0.35 of an acre site is being advertised as having 'development potential'.

Sold Prior to Auction:


Star Inn, Wick, Vale of Glamorgan, GP £225,000 UPDATE 09.07.12 Sold prior to auction
Lounge, public bar, trade garden and car parking. An ex-Welsh brewers house, the pub has seen better days but could reopen under new ownership. One of the this pubs in this auction with a lot of potential.

Town centre circuit pub, open-plan bar areas, extensive accommodation. Currently closed. Only smoking area appears to be the street. Looks like a residential conversation to flats may be on the cards here
Maesycwmmer Inn, Hengoed, GP £125,000 UPDATE 09.07.12 Sold prior to auctionLarge, two-bar roadside pub with car park and outdoor areas. Being sold as 'prominently located...suit development'


Dunraven Arms Hotel, Bridgend GP £295,000
Very large Victorian hotel near the train station. Interesting to see who has bought this and what will happen to it?

Away from the auction circuit I notice that Le Pub in Newport is up for sale. One of the few live music venues left in the City after the closure of TJ's, Le Pub has suffered due to it being an upstairs bar with no smoking access apart from the street.