Brains Craft Brewery beers to be launched this week


Wales' largest real ale ale brewery, SA Brain, who celebrate their 130th anniversary this year, have just built a smaller 'craft' brewery that can utilise different ingredients than its larger neighbouring brewery. Fresh hop flowers can be used in this new 15 barrel brewery, rather than hop pellets which have to be used in the 1970s plant, originally built by Bass. As certain hop varieties are not available in pelletised form until they can be grown in suitable quantities and there is enough demand for them, this new 'Craft Brewery' is able to brew beers with hops varieties not normally available to larger brewers.
The beers from the Brains Craft Brewery will be launched at the Great Welsh Beer & Cider Festival this week and will be in selected Brains pubs in the coming weeks. These selected pubs will include favourites such as the City Arms, the Goat Major and the Coach & Horses in Chepstow. 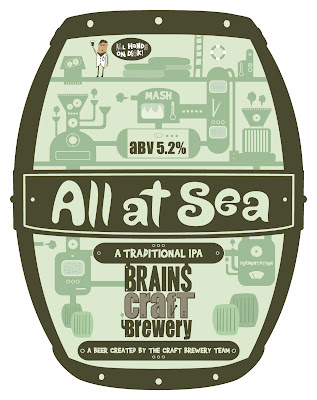 All At Sea was the first brew on this new 15 barrel plant and it is a deep golden-coloured IPA or Indian Pale Ale with a fresh blackcurrant and cherry aroma caused by the Bramling Cross hops in this beer. Admiral hops are also used in this beer, together with Pale Ale Malt. There is a smooth, bitter and fruity taste that leads to a dry, slightly astringent aftertaste. A very easy drinking beer, despite the 5.2% ABV. 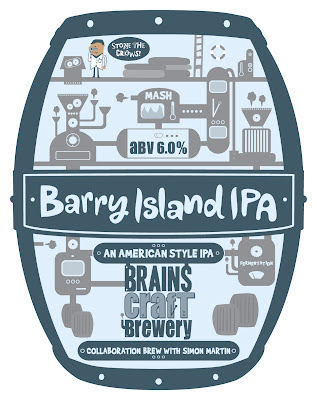 Brewed by Simon Martin, the real ale reviewer on You Tube, this is a golden IPA with a hefty aroma of citrus flavours, especially grapefruit. Brewed with a trio of American hops – Zeus, Summit and Cascade, an initial smooth flavour leads to the huge citrus flavour of the hops kicking in towards the end, with oranges and a dry finish becoming apparent.