King gets the chop 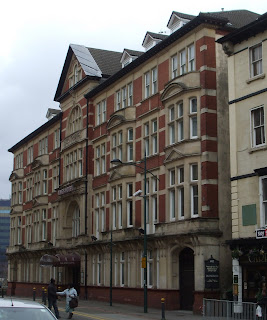 King's Hotel, Newport
Another famous outlet closes in Newport, the Kings (awful looking website warning) was shut and boarded up last week. Owned by Punch Taverns and leased to Follandmill Limited, the hotel, like Newport itself has been in terminal decline for a number of years. I visited the Kings last year for a reception after a funeral and the company running the hotel did not even open the bar, a big mistake when there were a lot of people of Scottish and Irish heritage present. Situated on High Street, the Kings once had a thriving public bar, called the Raglan Bar, but this was lost in a refurbishment some years ago, the owners deciding that the locals who put money over the bar every day were less important than the occasional visitors who stayed in one of the 60 or so rooms in this hotel. Another failed venture was the opening of a Chinese restaurant on the premises. Newport Council have not helped, their pedestrianisation of High Street prevented 24 hour access to the hotel and the very small hotel car park at the rear did not help. There is a new multi-story car park opposite the hotel but it's not open 24 hours, as tourists to the Ryder Cup found out a couple of years ago. The Hotel also features large function rooms, one big enough to hold Van Morrison concerts in the 80s.
To the rear of the building are some older buildings around a courtyard - always thought this could be opened up to provide an outside area, then again the pub needs its car park spaces.
So what we are left with is a late-Victorian hotel that has not moved into the twenty-first century.
It is unclear what will become of the building at the moment, elsewhere in the City, the Westgate Hotel has stood empty for years, again that closed due to lack of parking.
Brief history:
1750s – building on this site known as the King's Head
1811-1815 known as the King's Arms
1872 – part owned by Lord Tredegar
1900 – rebuilt after a fire
1950s featured on a Hancock's Brewery print 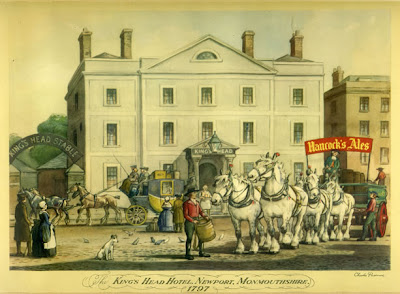 How many times does it have to be said before local cuntcillors get the point? "Town centre business closes due to lack of parking"