Blacksmiths Arms, Llanmaes, Vale of Glamorgan, CF61 2XR
Open all Day.
The Blacksmiths is situated in the village of Llanmaes, a short distance north of the historic town of Llantwit Major. The village has its own historic sites including a Roman camp, Norman castle and a Celtic Cross in the church. The pub was built in the mid-nineteenth century and named the Blacksmiths after the nearby smithy, the anvil of which is preserved opposite the pub car park. 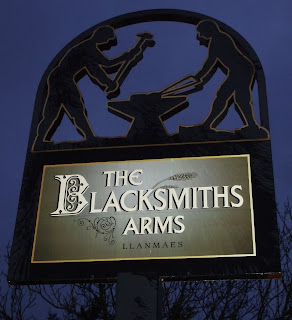 The Blacksmiths is a two-story stone-built that has been extended over the years but still retains a distinct atmosphere of a traditional Vale of Glamorgan public house with its wooden beams, stone floor and real fire. Once owned by Welsh Brewers, the pub is now owned by Punch Taverns. An unusual cast-iron pub sign of two blacksmiths at work hangs outside of the pub and there is a large car park to the side.
Inside the Blacksmiths features a welcoming log-burning fire, perfect after coming in from the rain and the cold this time of year. The light-grey bare stone walls of the interior contrast with the dark slate stone floor and the light-brown of the wooden bar. There are four handpumps on the bar, featuring Hancock’s HB and Brain’s Rev James as the permanent ales and two guest beers from breweries such as Wharfebank and Black Sheep from Yorkshire, Harviestoun from Scotland and Butcombe from Somerset. There are tasting notes on the wall for the real ales as well as a booklet listing their future beers. The Blacksmiths Arms holds Cask Marque accreditation as well as being in the 2012 CAMRA Good Beer Guide. A good range of single malts is also available.
The pub features plenty of seating with pews and tables in the front extension which leads out to a patio area. Smaller tables are in the bar area and there is another extension at the rear of the pub with another wood-burning fire.
The walls are decorated with old photographs of the area and daily newspapers are provided for customers to read. A charity quiz night is held on Wednesday nights and the pub hosts an annual beer festival every June.
Food is served 12-3, 6-9 weekdays, all day on Saturday and 12-4 Sunday. There is a printed menu and a chalkboard menu, the latter changes daily and features home-made and locally-sourced ingredients. Pasta. Fish dishes and a traditional Welsh cheeseboard all feature on the menu and there is a steak night on Tuesdays.
Public Transport: Infrequent  bus service to the village but Llantwit Major with its bus terminus, taxis and railway station is less than 20 minutes walk away.
Google Map:
View Larger Map