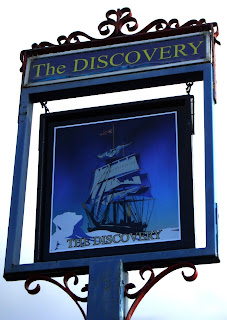 The Discovery was built in the early 1960s and this brick-constructed building is set back from the road with its own car park. The pub is named after Scott of the Antarctic's ship which sailed from Cardiff on its ill-fated voyage one hundred years ago and a picture of the ship, encased in the ice features on the pub sign. The pub was so-named  as it is close to the Scott memorial in Roath Park. Unusually the Discovery still keeps its 1960s layout with a separate bar and lounge and has not been knocked through into one bar.
The lounge bar is on the left of the pub and the public bar is entered via the right-hand side. The long bar in the lounge is made up of contrasting wooden panels and on the bar counter are four gleaming chrome handpumps, serving real ales such as Greene King Abbott, Sharps Doom Bar and Butcombe Bitter as well as another guest such as the Brain's Seasonal Beer. As this is an Enterprise Inns pub the beer list is restricted to their beers but there are plenty of good regional breweries represented on this list.  The real ales are all served in branded glassware wherever possible and one is always served at the competitive price of £2.50 a pint. In the summer a real cider is available on one of the handpumps.
The lounge bar features brass handrails and a central raised fireplace with seating around it. Towards the rear of the pub there is an extensive function room, entered via doors with stained glass windows of Captain Scott's famous ship. Large art-Deco ceiling lights are a feature of the lounge and the walls are decorated with pictures of the lake in Roath Park and the Captain Scott memorial. There is a large mirror advertising Courage Best, a former owner of the pub, in the lounge as well.
The public bar is well lit and leads to a large heated patio area for smokers which acts as a sun trap in the summer months. The public bar also features a television screen and a dartboard.
Food is served between 12-2100, apart from Sundays when lunch is 12-1600 and booking is advisable. The menu features traditional pub food and there are daily chalkboard specials such as Chicken and Sweet Pea Pasta, home-made Pie of the Day and a daily curry.
The Discovery is the heart of the local community and features quiz nights every Wednesday night. Over the festive season choirs have been singing in the pub during the night.
Google Map:
View Larger Map