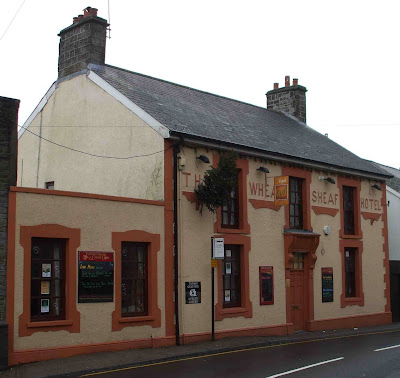 Wheatsheaf, 28 High Street, Llantrisant, CF72 8BQ,
Open Monday-Thursday 5-12, Friday, Saturday & Sunday 12-12,
The Wheatsheaf Inn is situated on the steep and busy main road into the historic town of Llantrisant, with a conveniently sited bus stop outside the front door. The town once played host to 25 pubs, though today that number is down to 4. Although the pub appears to be two-story from the front, there are extensive cellars and a rear patio area, providing extra space in this roadside pub. The Wheatsheaf seems to have had its origins as a pub in the eighteenth century, though it is first mentioned in 1815.
The Wheatsheaf has recently undergone a sympathetic refurbishment by owners, Caerphilly-based brewery Celt Experience, who have installed a micro-brewery in the cellar of the pub. Previously the Wheatsheaf was owned by the Fernvale Brewery of the Rhondda, who bought the pub in 1925, Fernvale were taken over by Webbs of Aberbeeg in 1949 and in turn by Bass Charrington in 1967. The pub has, in the past, been the headquarters of Llantrisant Rugby Club and even had a rifle range in its cellars at one point. 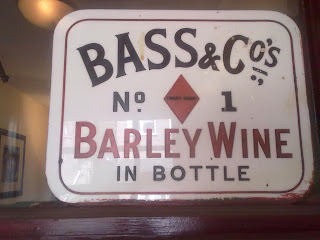 On the exterior the Wheatsheaf features chalkboards advertising bands and food offers on, as well as a new pub sign and the name of the pub embossed across the upper floor.  Inside, an entrance hallway with a couple of old tinplate Bass adverts in it leads to the bar on the left and the lounge and restaurant area straight ahead. There is a serving hatch in the corridor by the lounge, this, together with the separate rooms is why the Wheatsheaf Inn appears in the CAMRA book, Real Heritage Pubs of Wales, as the relatively unspoilt interior is regarded as being of special historical interest.
The bar room is quite small, but intimate, with an attractively carved wooden bar featuring five gleaming brass handpumps serving a range of real ales from across Britain, though with an emphasis on beers from Cornwall as the landlord is from that county. The beer range will shortly be increased to seven handpumps for the summer. Regular beers are Felinfoel Double Dragon as well as one from the St Austell Brewery range, together with other guests from the Wooden Hand and Skinners breweries of Truro. There is an extensive collection of pumpclips on the wooden gantry behind the bar of previous ales served at this pub. For lager drinkers Krombacher Pils is served on draught and cider lovers have Taffy Apples to enjoy. The landlord is hoping to hold a Cornish Beer Festival in the next few weeks.
From the main bar area a small passageway by the side of the chimney stack with its real fire, leads to another room with low settles, tables and a flagstone floor. This leads out to the upper patio area which provides smokers with a sheltered place. 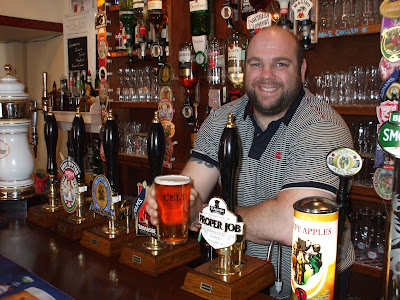 Above: Landord Tom behind the bar
The pub is decorated throughout with local pictures and there are books on real ale and the history of the area for customers to read through whilst enjoying their beers. The pub is also home to Wales' smallest brewery, the Korev Brewery, with a capacity of just 20 gallons a brew. The beer is brewed using well water from the pub's own source.
Food is available in the form of bar meals or via the separate steakhouse restaurant, not Monday & Tuesday.
View Larger Map

I understand that the cornish beer festival is been put back to may? do you have any dates?

No dates as yet.
Too many fests coming up around the same time.
Will post when I know the dates

cheers, hope you enjoyed the Boars head this weekend too.