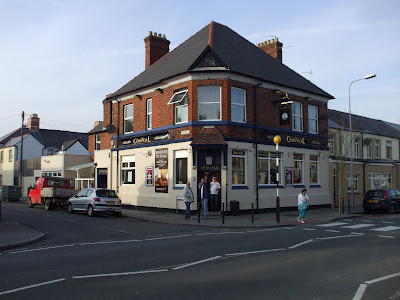 The Cornwall, 92 Cornwall Street, Grangetown, Cardiff, CF11 6SR
Situated on the junction of Cornwall Street and Hereford Street and just off Clare Road, this popular Grangetown local is a two-story brick-built pub, half-whitewashed and features a very large and imposing slate roof, the steep angle of which makes the Cornwall stand out from the surrounding buildings. The pub was opened in September 1894, although it was built the previous year but could not get a license to sell alcohol when first built. The expansion of Grangetown in the late nineteenth century created a demand for pubs and eventually it was granted a license. Originally the pub had four separate rooms as well as an off-sales area, the jug and bottle shop, but over the years these areas have been knocked through, although only partly in places with the remains of the original brick walls being able to be seen and today. The main, front bar has a lively but friendly atmosphere, with its dartboard and raised seating areas.
The corner doorway and porch leads into the main public bar, well-lit with large windows and decorated with wood panelling. To the left of the main bar a side passageway leads to the lounge/dining areas and a rear room which features a cast-iron fireplace with a decorative tilled surround and large, low backed settle-type seating set against the walls. The bar features a mahogany top and, more unusually a large brass plate underneath with a thick rope, that stretches the length and curves around the counter. The beer range is from Brains with Dark, Bitter, SA and their seasonal beer, currently Bread of Heaven, all served from the gleaming brass handpumps. On the Hereford Street side, in the single-story extension to the Victorian building is a doorway allowing access to a small outside seating area which provides the Cornwall with a smoking solution in this small, street-corner local.
The Cornwall is decorated throughout with photographs and drawings of HMS Cornwall; from the days of sail, through to the First World War Dreadnought and later ships to bare that name. The Cornwall is very much a community pub with quiz nights every Thursday night and a cupboard of silverware cups won by the various pub teams this pub plays host to. The pub is supposedly haunted by Will The Pig, the father of an old landlord who died in the lounge.
Food is served all day, with menus and separate chalkboards advertising the daily specials with special offers available Monday-Thursday and a curry & pint offer every Wednesday, as well as a loyalty card for those drinking the Brains cask ales.
Google Map:
View Larger Map