A visit to Theakston's Brewery 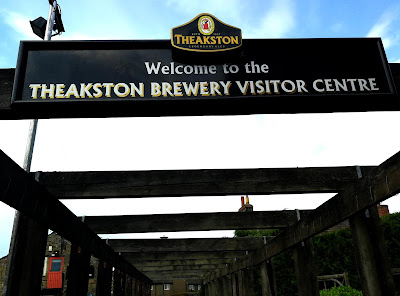 The small market town  of Masham is home to 2 breweries, Theakston and Black Sheep, both owned by different branches of the same family.
Theakston's was founded in 1827 at the Black Bull pub and expanded here, to Paradise Fields in 1875. Theakston's was owned by Scottish & Newcastle between 1987-2003 and some of the beers were brewed elsewhere, now the brewery is independent once more all the beers are brewed in Masham.

Masham is surprising in that it is home to to large breweries, as the town is quite isolated, to reach here by public transport is a bit difficult but is possible, there is a two-hourly daytime bus service running from Ripon (it's a City!) to Richmond. Ripon is served by an excellent bus service from Leeds and Harrogate, buses run every 20 minutes during the day and hourly at night, free WiFi on the very comfortable buses as well! 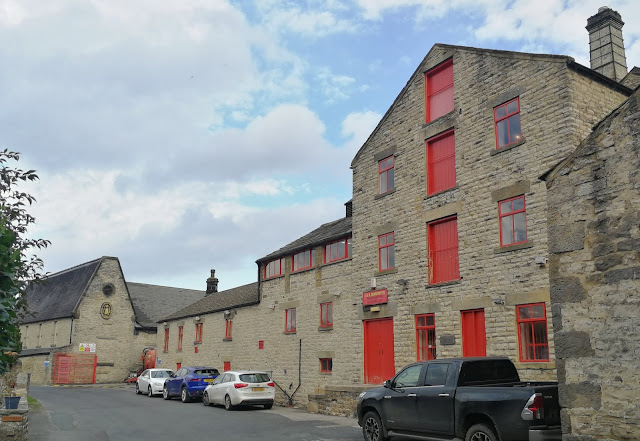 The brewery itself is rather difficult to photograph from the outside, not being on a main road but almost hidden down a lane in this flat market town, no hills to have a strategic view here. 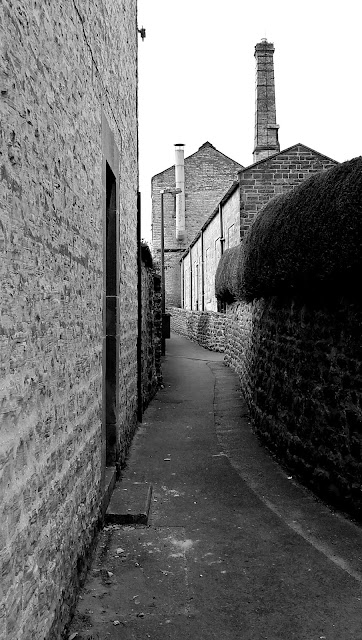 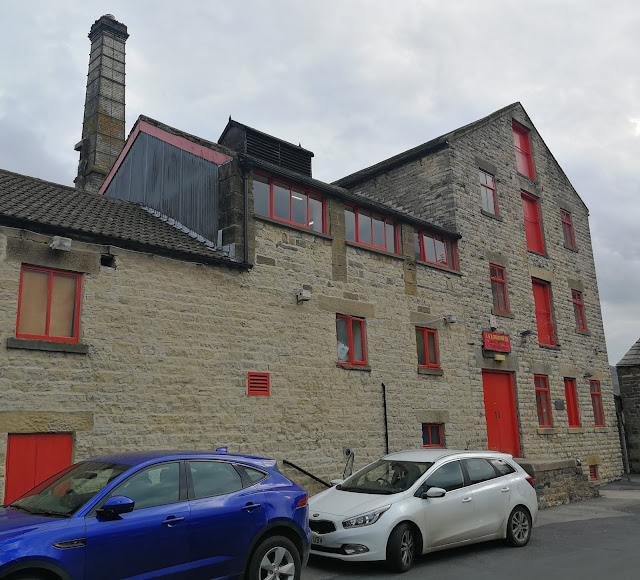 Below: the former maltings of the brewery 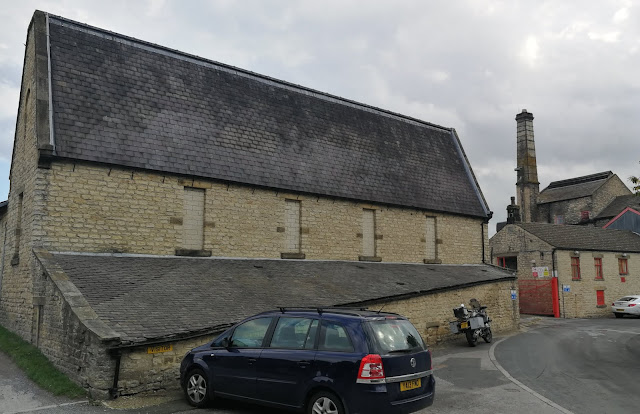 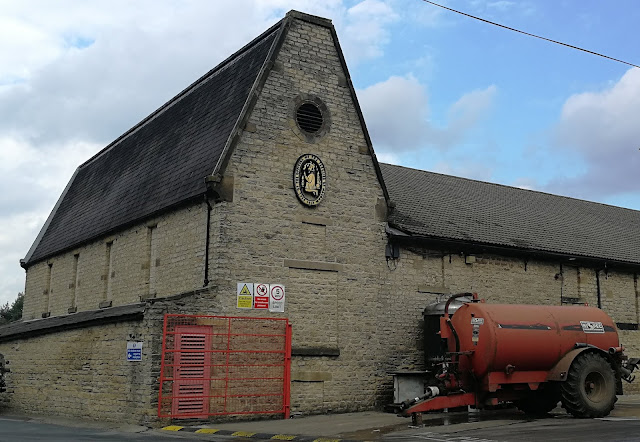 The Theakston's Visitor Centre is tucked away around the back of the brewery, housed in the former brewery stables. 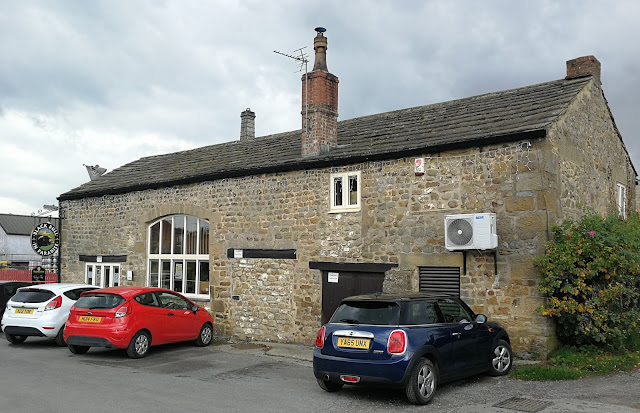 The visitor centre is named after the original pub that Robert Theakston had started brewing in, back in 1827 and the Paradise Fields that the brewery moved to 1875 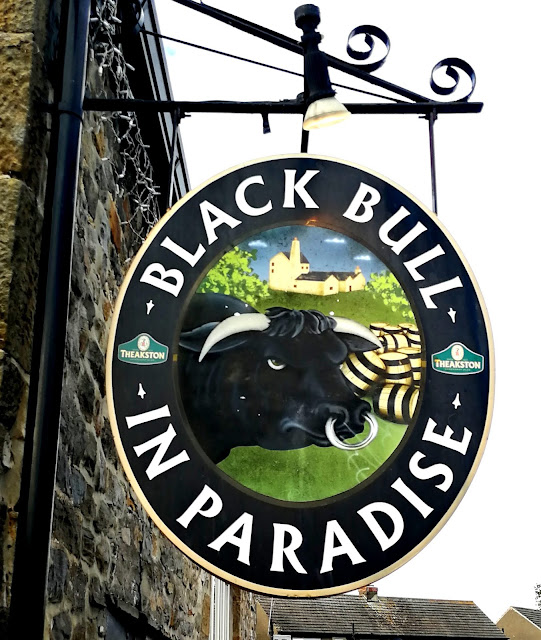 The visitor centre features a bar and a shop selling plenty of Theakston's breweriana, though, unfortunately no book on the history of the brewery. 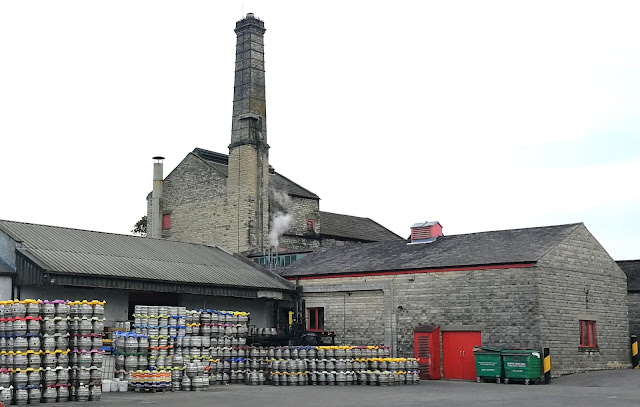 Above: The brewery yard from the visitor centre
Below:the malt on the ground floor of the brewery, waiting to be hoisted to the top of the tower brewery 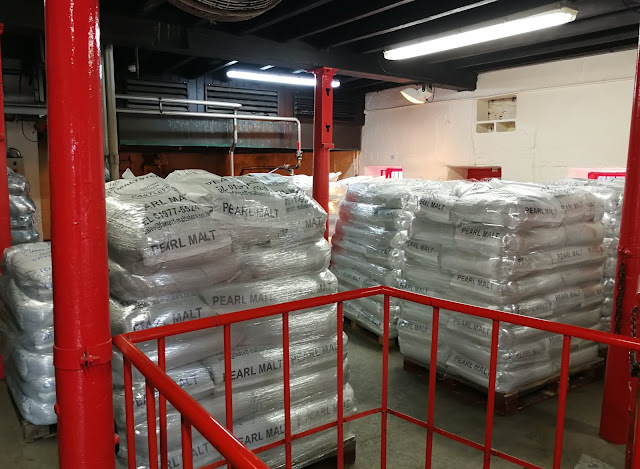 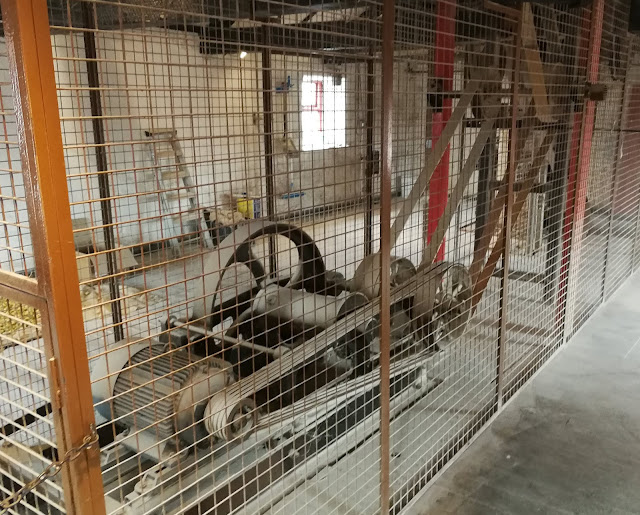 Above and below: the grist mill at the top of the brewery

From the grist mill to the mash tun, via, of course, the Steele's Masher 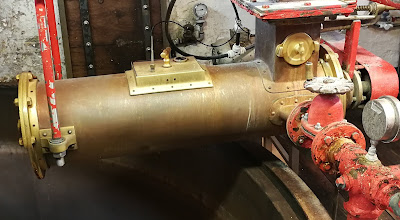 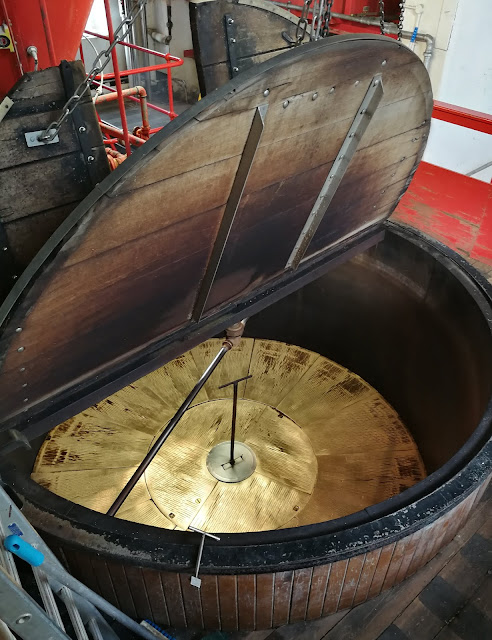 I did ask if this was the original mash tun as it looks it, the tour guide said yes, I then asked if this was the oldest working mash tun in the country, unfortunately the tour guide didn't know and replied that there were breweries older than Theakston's, naming Jennings and Robinson's, I replied that both have had major refits and don't use the original equipment. So is this the oldest working mash tun in the country? Harvey's or Palmer's may be brewing with something older but most other regional brewers have modernised or upgraded. Still if it works, why upgrade? 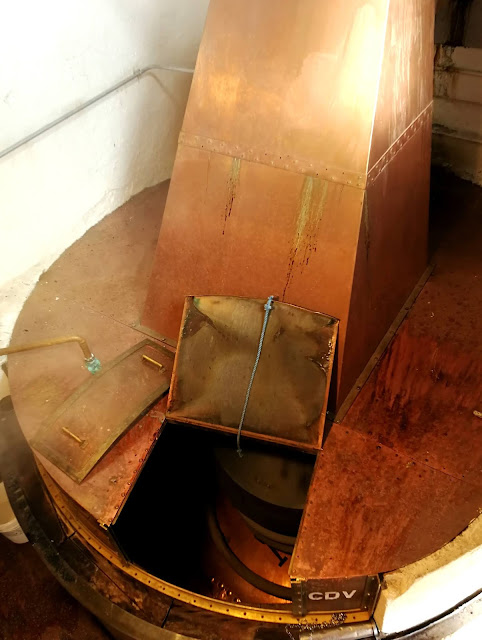 The day of my visit was a brewing day, so there was plenty of steam around to cause the autofocus on my camera to malfunction, however, the photo below is in black and white as it shows the steam rising into the louvered roof and escaping. 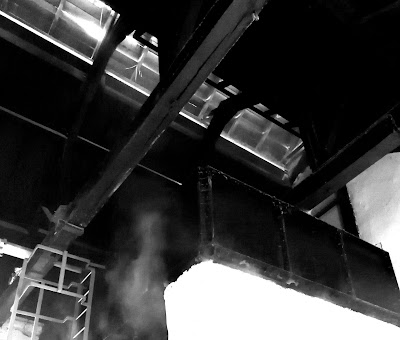 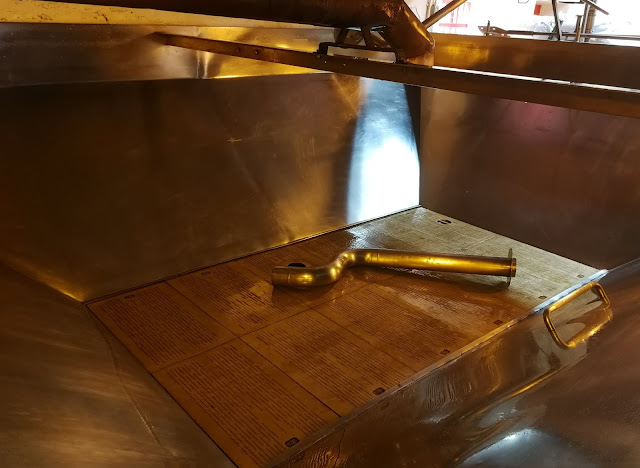 Back on the ground floor this fine vessel is the hopback 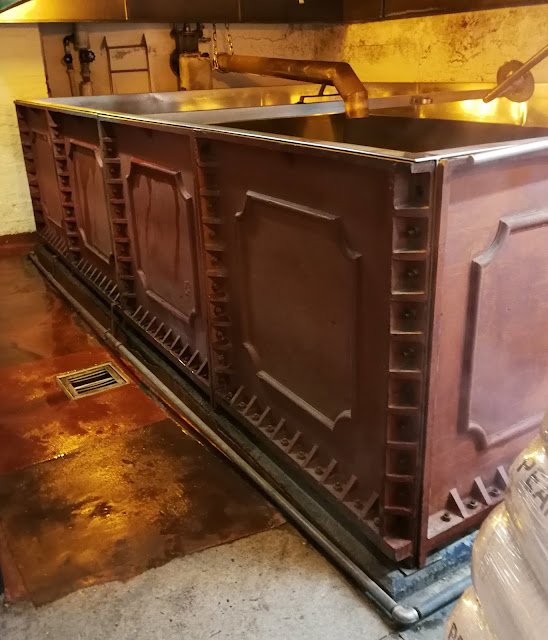 Below: the open square fermenters, although two at the end appear to be covered 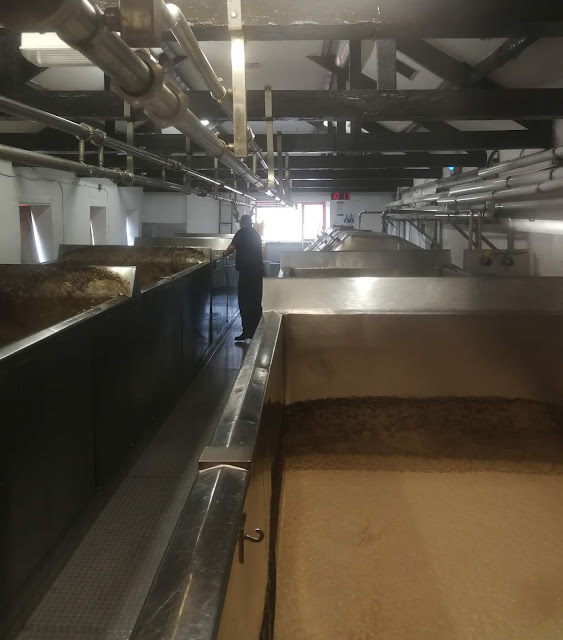 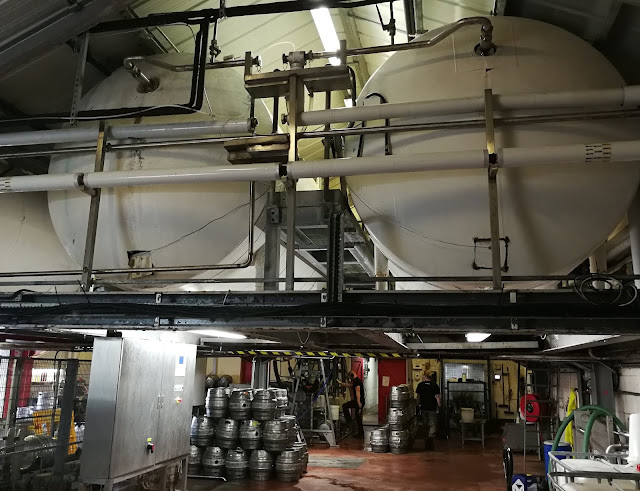 Final stop off was the cooperage, house in the old blacksmiths shop next to the stables. 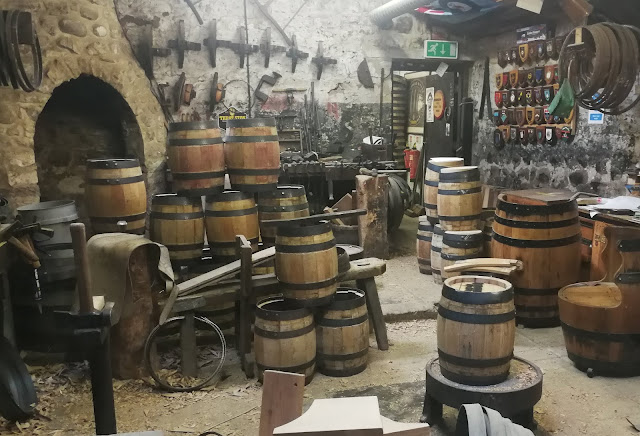 Then back to the Black Bull in Paradise for the beers 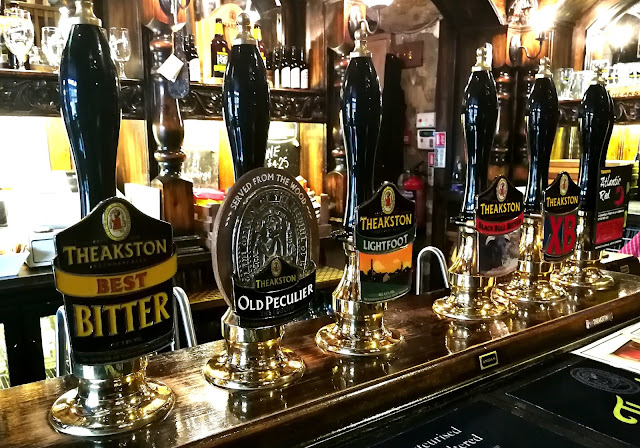 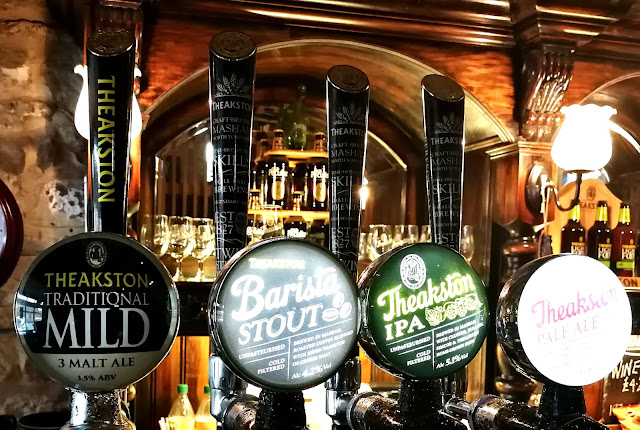 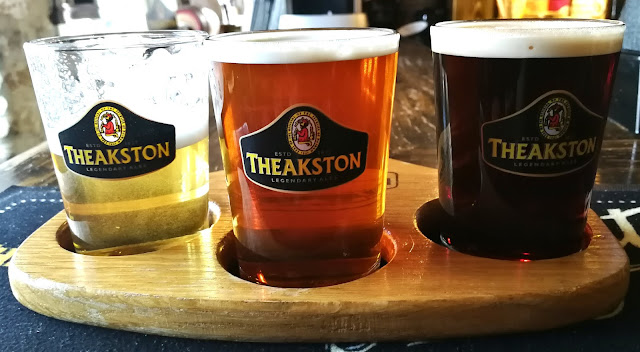 Three thirds of Theakston's beers are included in the price of the visit (£8.50 2018), yes the one on the right is the famous Old Peculier, named after the "Peculier Court of Masham", an ecclesiastical court set up in the twelfth century so that the Bishop of York did not have to make the long and dangerous journey to the town.
Overall an enjoyable visit to a brewery, although it's rare for me not to enjoy them! It's not often I visit an almost unchanged Victorian Tower Brewery, the heat and the steam
A bit let down by the knowledge of the staff, then again this was an ordinary visit, I often find the general pr staff unable to answer my questions! The only other fault is that in the extensive shop that sells everything from branded shirt to branded cake, there is no book on the history of this brewery.

The next post will be of the other brewery in Masham, Black Sheep.