A few years ago, the only advertising Brains used to do was paint the railway bridges of Cardiff!

The campaign will run across 48 sheets and bus backs in Wales. In addition four of Brains’ city centre pubs in Cardiff have been fronted with large format banners, including The City Arms which is located directly across the stadium.

To back the campaign at an in-outlet level, Brains have created kits to drive footfall over the rugby season. Over 650 kits have been sent out containing fixture posters, magic 8 posters and banners.

Brains have also utilised this key time to drive awareness of two of their biggest cask ale brands with their key consumers. Newspaper adverts for SA Gold and The Rev. James will appear in the sports section of the Telegraph and The Times respectively each weekend during November.

The SA Gold advert will run with the strapline ‘All Beers Have Heads, Only Ours Have Brains’, while The Rev. James advert focuses on the heritage and history of the brand. The Rev. James was the founder of Buckley’s Brewery which was purchased by Brains in the nineties. 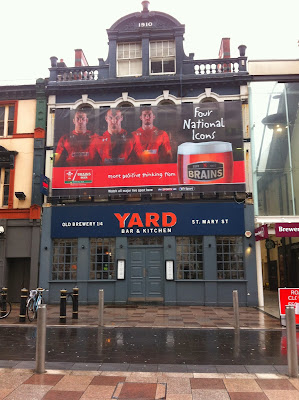