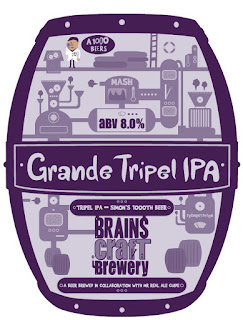 This year Brains will take six brand new beers to the Great Welsh Beer and Cider Festival.
Along with four well-loved beers SA Gold, The Rev. James, Dark and Barry Island IPA, Brains will have six new beers on the bar including a beer celebrating this summer’s rugby in Australia and an exclusive limited edition range.
Touch.Paws.Engage, a 4% golden ale celebrating the summer’s rugby Down Under.Brewed with Australian hops Galaxy, Ella and Summer, this golden coloured ale has aromas of fruit and tropical citrus flavours that make this the perfect light summer ale.
Terry’s, a chocolate and orange porter brewed with Premium, Crystal, Brown and Chocolate malts. The addition of cacao nibs in the boil gives a luxurious and intense chocolate flavour with a bittersweet finish and zesty aroma from sweet orange peel and organic orange zest.
Stars and Stripes, a 5% naturally hazy golden coloured ale brewed with wheat malt and Californian Ale Yeast. An all-American hop line-up of Chinook, Centennial, Citra and Amarillo gives aromas of grapefruit and tropical fruit on the nose, citrus flavours and a crisp bitterness making Stars and Stripes a deliciously drinkable and refreshing beer.
In addition to these, the Brains bar will have recent favourites from the Craft Brewery – Farmer Walloon and Bragging Rights.
There will also be a limited edition range of three exclusive beers that the Brains brewers have been working on for the past few months.
Only one barrel of each will be tapped on each day of the three-day festival, followed by a second barrel launched in a Brains pub.
Cooper’s Reserve, a 10% Penderyn whisky-aged beer launched on Thursday at the festival then in the Cardiff Cottage.
Low-Hanging Fruit, a 4.8% sour cherry dark launched on Friday at the festival then in the Goat Major.
Grande Tripel IPA, a 8% Tripel IPA launched on Saturday at the festival then in the City Arms on Sunday.Grande Tripel IPA was brewed with Simon Martin, aka Mr Real Ale Guide on You Tube, and will be reviewed as his 1000th beer on his channel.
Ian Beattie, Brand Manager says “The Great Welsh Beer and Cider Festival is a great festival for us to introduce new beers especially as it’s on the Brewery’s doorstep. The Brains Craft Brewery has allowed us to trial a variety of different beers and with such a variety of styles there’ll be a beer for everybody on our bar at the GWBCF.”
The GWBCF runs from Thursday 6th - Saturday 8th of June in the Motopoint arena, from 11am to 11pm.
Visit the GWBCF website for more information and to buy tickets for the festival -  You can also find them Facebook (Great Welsh Beer and Cider Festival) and Twitter @GWBCF