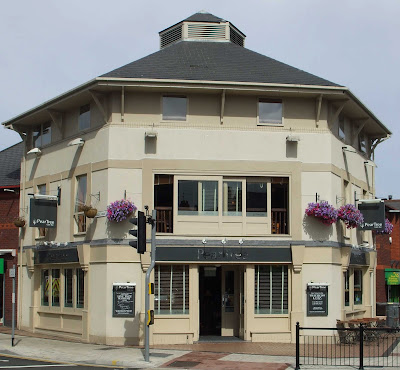 The Pear Tree is an unusual modern polygonal building on the corner of Albany and Wellfield Roads. The pub has gone under other names previously, once it was Bar Billabong – an Australian-themed pub and before that it was 42nd Street as this was the last film shown in the Globe Cinema which used to occupy part of the site that now forms the Pear Tree. The pub has been extensively refurbished both outside and inside since it’s incarnation as an Australian theme pub, today the Pear Tree Café Bar is much more like a traditional pub with bare wooden floors and stripped pine tables, wooden settles and couches. The dark red-brick of the old Bar Billabong has been rendered in an off-white covering to give it a lighter, more pleasant appearance.

A central feature is the spiral staircase that leads up to the first-floor level with views across to the road to the Victorian church opposite. The spiral staircase also leads down to the basement toilets or, alternatively there are disabled toilets on the ground floor. There is plenty of wood panelling and shelving in the pub which are used for books for customers to enjoy. Daily papers are also available for customers to read. Old and somewhat eccentric photographs are on the walls and there is free WiFi for customers to use throughout the pub.

The dark wooden bar is on the left-hand side of the pub features two gleaming chrome handpumps with Brains Bitter and a house beer ‘Grumpy Landlord’. Wales largest cask ale brewery SA Brain also use the Pear Tree to put their keg craft beers on so that the wheat beer Weiss Weiss Baby and the American IPA Barry Island IPA have been on tap here. SA and SA Gold are also available in bottles along with some of their bottled craft ales. All the beers are served in the new branded glassware from Brains Brewery. Alternatively there is an extensive wine list as well as a full range of coffee.

Food is served all day from 0830 to 2200 with extensive chalkboard menus with breakfasts, tapas and flat bread or sour dough sandwiches and burgers available.

The Pear Tree regularly hosts live music and is also home to the Pear Tree Bake Off – a charity competition to find the best home baker in Roath. The Pear Tree markets itself as a café bar but appeals to a wide range of clientele as customers of all ages enjoy this pub.

Street view has the pub as it looked when Aussified: