From the Daily Post, click image to enlarge.
I think the article says it all.
Buckley was unavailable for comment as, according to a source at Evans-Evans Brewery, "He is on holiday in the South of France". Nice for some, being able to afford that, unlike his former employees who will be lucky to get a fraction of what they were awarded as the company has since gone into liquidation.
Odd that the person who made these comments is a former public schoolboy who later ran a gay nightclub - he doth protest too much methinks! Its also not the first time the old crook has cast such mistruths - I have been a victim of his attacks as well - check out this site - the photos are used illegally as well, still copyright theft is just another of the long list of crimes that can be added to his charge sheet.

Wonder how long the Carmarthen Journal will wish to associate itself with a columnist who holds such views as this?

Update:
It appears that Buckley has ordered his 'partner' to remove the offending post, however here it is available as found on the Google cache:"
"This is Google's cache of http://walesbrew.blogspot.com/2010/02/james-daley-voice-from-closet.html. It is a snapshot of the page as it appeared on 23 Apr 2011 21:35:13 GMT. The current page could have changed in the meantime.

These terms only appear in links pointing to this page: http walesbrew blogspot com 2010 02 james daley voice from closet html " 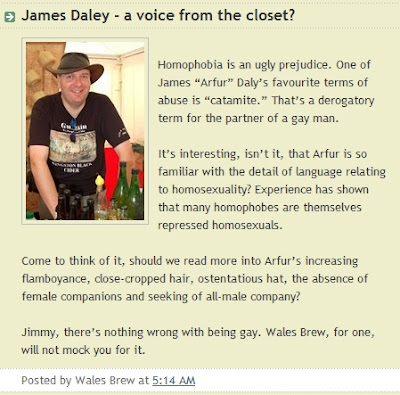 One doth protest too much methinks Mr Buckley!
Yes I am familiar with such language as having studied both Greek and Latin and attending University I would be converse with such terms. Come on Simon, if you disappear any further into the closet you will be in Narnia. Time to step out into the real world for once?

Update 2:
It seems the Daily Mail have picked up on the story as has the Pink News - comments are worth reading on the latter.