The beginning of March will see the first big pub auction of the year as failing pub companies Admiral and Enterprise attempt to dispose of some of their pubs. The freehold of 29 pubs will be sold at auction at the Celtic Manor, Newport, by Sidney Phillips on Wednesday 2nd March.
Many of these pubs have suffered from lack of investment over the years from the pub companies and some have suffered periods of closure.
Having checked the Sidney Phillips auction site today I see a number of the pubs in the original auction have been withdrawn from sale or had their guide price reduced.
A few of the pubs are known to me so lets have a look at what is up for auction: 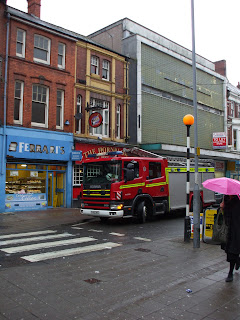 Hornblower, 126 Commercial Street, Newport (pictured right, behind the fire engine!)
A famous bikers pub that has had problems with alcoholic staff and gang warfare in the past as well as being shut for months on end. The new tenants have improved the place by cleaning it, always a good start! The location of the pub is not helped by the fact that it is between two derelict buildings and that the cellar is prone to flooding due to the fact that it is below the main sewer!
Built in 1872 as the Ram Inn, it was later named the Exchange before becoming the 'Blower. Previous owners have been Lloyds & Yorath Brewery, Ansells Brewery, Punch Taverns and Admiral Taverns. The pub used to be a regular in the Good Beer Guide. Smoking solution – the street.
Guide Price £160,000 - Now reduced to £130,000!
Talisman, 59 Commercial Street, Newport. Dating from at least 1860 when it was the Isca Brewery Tavern, this pub was owned by Phillips Brewery and then Courage. In latter years the pub has been a bit of dump, popular with the section of society who are too lazy to climb nearby Hill Street to the Salvation Army building. Smoking solution – the street.
Guide Price £195,000
Engineers Arms, 3 Albert Terrace, Baneswell, Newport. A corner pub in a residential area of the City, the Engineers has suffered periods of closure over the last few years. Recent tenants have even had problems getting regular beer deliveries as current owners Admiral Taverns have been experiencing credit problems with breweries. I have visited a couple of times in the last few years but the erratic availability of beer has prevented the Engineers from becoming a regular stopping point. The Engineers dates from at least 1872 and was a freehouse until 1950 when Hancock's Brewery bought it, later it went to Welsh Brewers, Punch Taverns then Admiral Taverns. The Engineers features in the CAMRA publication 'Real Heritage Pubs of Wales'.
As this is a residential area there is a chance that any prospective purchaser would prefer a flat/houses conversion to this corner pub. Smoking solution – the street.
Guide Price £185,000
Carpenter's Arms, High Street. Currently owned by Enterprise but leased to JW Bassett pub company this pub had been shut for a few years until it reopened last year. Not surprisingly JW Bassett have turned around a failing pub into a successful venue. Smoking solution – the street.
Guide Price £225,000
Red Cow, Ystalyfera, Swansea. Also featured in the CAMRA publication 'Real Heritage Pubs of Wales', Ystalyfera is a dead-end town at the top of the Tawe Valley, populated by a closed-knit gene pool that makes the residents of Royston Veasey seem normal. Surprisingly there are quite a few other pubs and clubs in this town so competition is fierce.
Guide Price £85,000
Star Inn, Llanfihangel-Tor-Y-Mynydd, Llansoy, Monmouthshire.
A country pub set in rural Monmouthshire, this pub has extensive grounds and the pub company that purchased it only a few years ago paid well over a million for it. Since then it has experienced periods of closure and resulting loss of trade. A pity as when it was family-owned it was successful with a popular restaurant area.
Guide Price £280,000
Ty-Yn-Y-Pwll Inn, Trethomas, Mid-Glamorgan. Situated on the busy Newport-Caerphilly road this two-bar pub has a car park and should be a success. Unfortunately the pub company that has been running it has changed the lagers and beers from the ones that customers had been drinking for years so they went elsewhere. Last time I went past on a Saturday afternoon just before Christmas the pub was closed. Has a garden so more of a smoking solution than the pubs above.
Guide Price £210,000
Cambrian Inn, Blaenavon
About 15 years this was a cracking family-run locals pub with varied real ales, changes in ownership appear to have pushed it to a Guide Price of £65,000
Well that's it for the pubs I know well, others in the auction include :
Rising Sun, Fochriw (currently closed) GP £75,000
Forest Hotel, Pontypridd (currently closed) GP £140,000
Colliers Inn, Skewen, (currently closed) GP £130,000
Tylerstown Conservative Club (currently closed) GP £87,500
Full Moon, Trecynon, Aberdare (currently closed) GP £95,000
Royal Hotel, Trelaw, Tonypandy (currently closed) GP £150,000
New Beethoven, Maestaeg (currently closed) £190,000
De Winton, Tonypandy, GP £80,000
Wattstown Hotel, Wattstown, Porth, £110,000
Ruperra, New Tredegar, GP £110,000
Copper House, Cwmavon, Port Talbot GP £115,000
Railway Inn, Llangynydd, Maesteg GP £120,000
Puddlers Arms, Rhymney, GP £130,000 Now reduced £100,000!
Smiths Arms, Pengam, Blackwood, GP £130,000
Bowen Arms, Swansea, GP £140,000
Black Prince, Ynysddu GP £175,000
Prince of Wales, Treorchy GP £175,000
Admiral, Cadoxton, Barry, GP £175,000
Mill Tavern, Coed Eva, Cwmbran GP ££225,000
Waterloo Inn, Oakfield, Cwmbran, GP £190,000
Star Inn, Mamhilad, Pontypool GP £180,000
Fox & Hounds, Llanharry, Pontyclun, GP £195,000
Fagins, Thomastown, Rhondda, GP £225,000
Tair Bull, Libanus, Brecon GP £170,00
Cogan Hotel, Penarth GP £225,000 Now reduced £200,000
Sidney Phillips pub auction
1430 Wednesday 2nd  March 2011, Celtic Manor, Ringland, Newport, NP18 1HQ 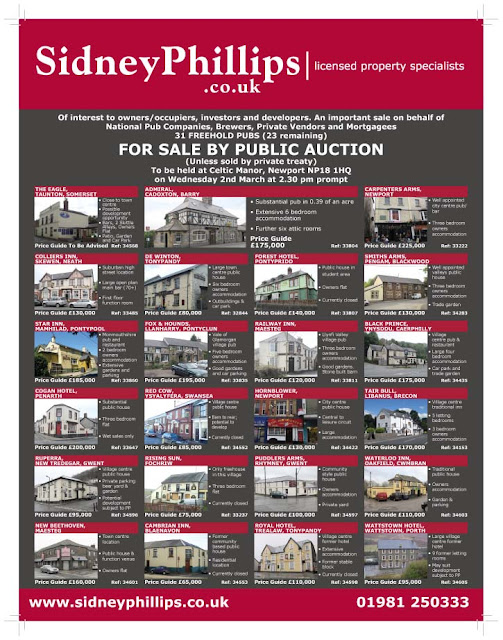 I think the admin of this website is in fact working
hard for his web site, for the reason that here every stuff is quality based information.