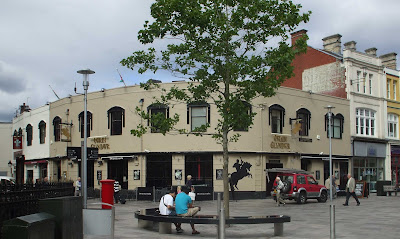 Owain Glyndwr/Tair Pluen, 10 St Johns Square/Church Street, Cardiff, CF10 1GL
The Owain Glyndwr, built in the shadow of St John's Church, is one of the oldest pubs in Cardiff and has had a variety of names throughout the years including rsvp, the Buccaneer, the Tennis Courts Hotel, the Kemeys-Tynt Arms, the Green Dragon and was known as the Mably Arms back in 1731. There is a building on this site shown on Speed's map of 1610 and the pub was once the brewery tap for Nell's Eagle Brewery, which was situated behind the pub until it closed in 1927. Nell's brewery, the Tennis Court and 11 other pubs were bought by Crosswell's Brewery and eventually ended up in the Whitbread Empire, then Laurel Pub Company, Discovery Inns and now the pub is now owned by the Stonegate Pub Company. Today the pub is split into two, with the larger Owain Glyndwr side being open all day, and the smaller Tair Pluen bar being open at night. This pub has a two-story stone frontage and occupies the corner of Church Street and St John Street.

The Owain Glyndwr side features old photographs of Cardiff and paintings, including one entitled,  “The Fall of Harlech Castle”, which Owain Glyndwr did not actually take by force, but by bribing the English garrison to leave the castle in 1404. Still it is good to see a pub that has finally settled on its name, even if it is named after a Welsh historical character who did burn down Cardiff and Newport. The Owain Glyndwr also features wooden floorboards and varnished wood panelling throughout the pub as well as a raised dining area with a good view of the St John's Church and the pedestrianised shopping area. The interior of this bar is spacious and there is another dining area upstairs. Food is served all day until 9pm. There is also plenty of seating and tables outside the pub, for those wishing to smoke, or just embrace the café culture of pavement drinking.
The Tair Pluen or Three Feathers, named after the Prince of Wales' coat of arms that feature on the pub sign outside, features music on Thursday and Friday nights and is a narrow, split-level bar. There is also a  function room available for customers to use for free. Both bars feature 4 real ale ales, which change regularly and often feature local breweries such as Brains, Felinfoel and Vale of Glamorgan. Around 12 different real ales are served every week between the 2 bars.
The Owain Glyndwr/Tair Pluen make interesting additions to the Cardiff pub scene and a change from the usual superpubs that tend to dominate the City Centre.