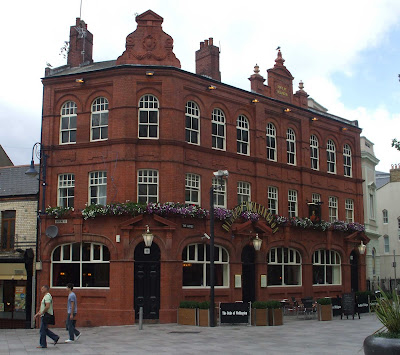 Duke of Wellington, 42 The Hayes, Cardiff, CF10 1AJ
Facebook site here
The Duke of Wellington is an unmistakable three-story red-brick building facing the St Davids 2 shopping centre and decorated with flowers hanging on the outside. The pub has recently been refurbished by owners SA Brain. Built in 1892, the pub was named after the Iron Duke to commemorate the fortieth anniversary of his death. Having been opposite a major building site for the last few years, the Duke of Wellington was in need of a much needed refurbishment and Brains Brewery have done well in bringing this bar up to the standards of a twenty-first century pub. The pub had in the last few years just been known as 'Wellingtons' but thankfully the refurbishment has restored the original name.
The tables and chairs outside the pub fit in well with the nearby café quarter of Mill Lane and the inside of the Duke features a range of seating areas with raised seating areas featuring tables and chairs to high tables and even a secluded couch area towards the side of the bar. As this is one of the Capitol' s smallest pubs, SA Brain have made good use of the available space in here and have even kept some of the original nineteenth century partitions which separated the bars and necessitated in the three separate entrance doors to the pub, although only two are in use today. Some customers may moan about the gents toilets being moved upstairs though.
The interior of the Duke features high ceilings with arches and plaster mouldings, along with large mirrors to make the best use of the available light. Old photographs of Cardiff are displayed on the walls and there is a bookcase in one section of the pub. The inside of the Duke also features dark wood tables and bar-counter but this is complemented by the light coloured walls and the gleaming brass handpumps and foot-rails on the bar. Even the keg fonts only have brass plaques on them to distinguish them from each other. Five real ales are served here, Brains Bitter, SA, SA Gold, Rev. James and a guest beer from another brewery. Recent guests have included Sunchaser from Everards Brewery in Leicester and the unusual-sounding Tettnang from York Brewery. There is also an extensive wine list and the Duke also has a choice of bottled beers and ciders including Orchard Gold from Gwynt Y Ddriag. Alternatively there is a choice of coffees from Costa Coffee available at the bar.
Food is available all day at the Duke and there are chalkboard menus for the Daily Specials and desserts, as well as the more conventional printed menus. The food can range from beer-battered haddock and chips to a cold meat platter with desserts such as Carmarthenshire ice cream and sorbet or cherry and chocolate fondant. A welcome addition to the Cardiff pub scene, the Duke does have the look and feeling of a new pub despite it being here for almost 120 years.