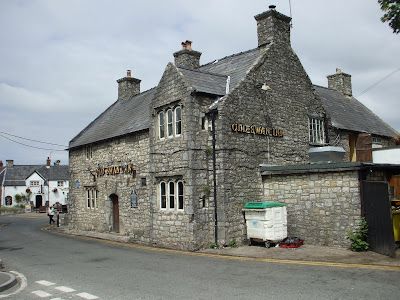 Old Swan, Church Street, Llantwit Major, CF61 1SB
Hosting a beer festival this weekend  (13th-15th August 2010)
The Old Swan is a sturdy, stone-built slate-roofed building, dating back to medieval times and situated in the historic heart of Llantwit Major, opposite the medieval town hall. The Old Swan dates back to the 16th Century when it was the home of the Raglan family but there are claims that there was a building on this site way back in the 11th Century. During the Civil War the pub minted its own coins. Today Llantwit Major is easily accessible via the train service from Cardiff and Bridgend. 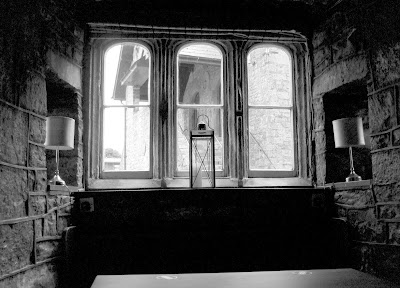 The entrance doorway on the front is an old wooden door and there is an old stone mounting block close by. The dark and cavernous interior, with candle-lit tables, hints at the age of this pub with old fireplaces, oak beams and stone arches appear with a likeable unregularity throughout this pub which has served some famous visitors throughout the years. William Randolph Hearst owned the nearby St Donat's Castle and famous guests were often transported into the town to try out this traditional pub. The interior of this pub has changed much over the years, so much so that one of the stone arches is now a feature behind the bar. The flag-stone floor adds to the character of this ancient hostelry as do the stone-framed Tudor windows.
The bar is made out of old Bass beer barrels and hops decorate the ceiling along with pumpclips of real ales that have been served here over the years. Newspapers are available to the side of the bar for customers to read. The real ales change often and the chalkboard above the bar informs the customer what beers are coming on next. Regular local breweries that feature are Wye Valley, Breconshire, Rhymney Otley, Felinfoel and Vale of Glamorgan as well as beers from further away such as Northumberland and Weatheroak (Birmingham). There is also a selection of bottled beers which include Tomos Watkin OSB and Cwrw Braf as well as Rhymney Dark and Export. Gwynt Y Ddraig cider is available in bottles. At weekends, up to four real ales are available, though during the week this number may drop to two or three. The Old Swan also holds a annual beer festival in August.
There is heated outside area for smokers and in the summer the outside drinking area makes an attractive place to have a relaxing drink as it overlooks the town square and war memorial.
Food menus are extensive with separate chalkboards for special, children and dessert menus.
There is another room to the rear of the building, this features pool tables and a jukebox. The Old Swan is the oldest pub in Llantwit major and well worth seeking out.
Journey Planner:
Google Map:
View Larger Map