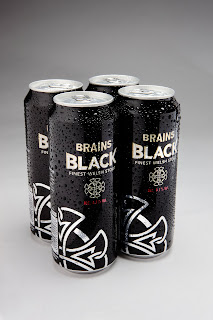 From SA Brain Press Release:
Brains’ decision to enter the competitive stout market has paid off. Just five months after launching Brains Black in pubs and the brewer has canned the beer for sale in Tesco stores throughout Wales.

The ‘classic Welsh stout’ was developed to provide stout drinkers with an alternative to the market leader. And it seems to be hitting the mark. Early sales figures show that it is proving to be a popular alternative among beer drinkers who have been tempted by the taste, price and provenance.

Richard Davies, Sales and Marketing Director at Brains said: “We always believed that Brains Black would sell, but you never really know how a product will be received by customers until you take it to market. Thankfully it has done better than any of us could have expected, which has given us the confidence to launch it to Tesco.

“It was never our intention to compete with more established brands, simply to offer Welsh consumers a credible Welsh alternative. Brains Black has proven that people are willing make the switch providing the alternative is a good one.

“It’s not only sales that have been encouraging. Independent research carried out just a month after launch reported that ‘Brains Black’ was familiar to 43% of Welsh beer drinkers*, which is an impressive result for a brand so young.”

Brains Black is available exclusively in Tesco stores throughout Wales. Its arrival in store means that the supermarket now stocks 14 Brains bottles and cans, including the ever popular SA, the newly launched IPA bottle and a mixed four pack.

Richard Davies added: “Three years ago we had just 3 brands available in Tesco, today we’re into double figures. It bodes well for the future and we believe that this area of the business will continue grow.”

Okay there ends the corporate PR stuff from Brains, now I did taste some of the draught Brains Black earlier this year and was impressed by its flavour - its not often you find a nitrokeg stout these with plenty of roast and chocolate flavour, who knows I may even have a can or two of this beer.