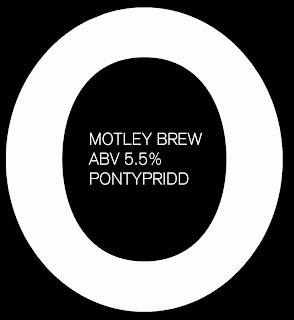 The multi-award winning boys at Otley brewery have a new beer out for this month. Motley Brew is described as "A tawny red double IPA. Loaded with bitterness from Chinook hops, and heavy on Cascade aromas. High bitterness but very easy drinking". Sounds good and I look forward to trying it, as the description does sound better than the bland ales produced by a former public schoolboy and ex-gay nightclub owner elsewhere in Wales. But let's not dwell on the reasons why Mr Bukake is unable to become a blood doner.
Motley Brew was originally brewed last November as a one-off for a beer festival at the Rake in Borough Market, London, and licensee Glyn Roberts came down to Pontypridd to help brew the beer along with Mat and Charlie Otley.
News also reaches us here of an Otley Beer Festival in May:

For the first time an ALL OTLEY BEER FESTIVAL will be held at the Bunch of Grapes with 18 Otley beers being served over the weekend.
A temporary bar will be set up close to the main bar to in order to serve 12 of the beers through hand pulls, the remainder on gravity.
Live music on Friday and Saturday evenings, BBQ Saturday from 12pm-6pm, Sunday Lunch 12pm - 3.30pm.
Beers Available:

Heaven. I'm a massive fan of Otley, but I normally have to wait until Beer Festivals roll around to try any of thier stuff on cask. Double Red IPA sounds great - the US do a lot of these but it's a style you don't see a lot of over here. Wonderful.