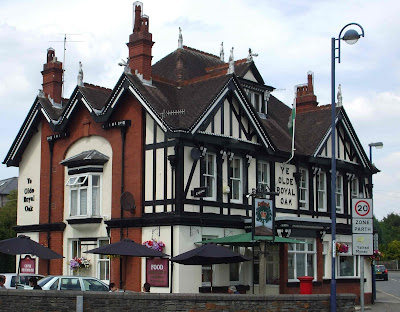 Proudly standing by the roundabout on the way into Ystrad Mynach, the Royal Oak, or to give it its full name, Ye Olde Royal Oak, is an early Welsh example of what is known as 'Brewers' Tudor' style of pub architecture. With its' unmistakable half-timbered frontage, the Royal Oak was built in 1914 by Merthyr Tydfil-based brewers Giles and Harrap, who had their name etched into the glass windows on the front of this pub. Another window has the word 'lounge' on it and there is even a window with 'Smoke' on it, now of course illegal to do so in a pub, but not just before the First World War when this pub was built. 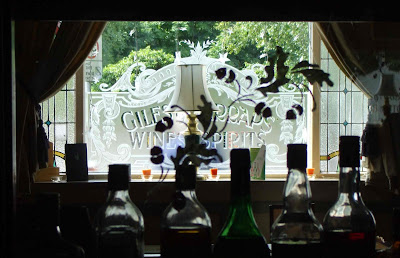 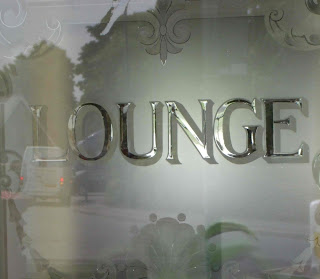 Today the Lounge has become the bar area and the bar is a seating come dining room. Apart from that, there have been few internal changes to the Royal Oak over the years and the pub is one of the few pubs to have retained separate and distinct areas that resemble the original layout. There is even a wooden rail in one part of the pub with acorns carved on it which could well be an original fitting of this pub.
Photographs of old Ystrad Mynach adorn the wall in the lounge, including one of the former, less grand pub that stood on this site before 1914. 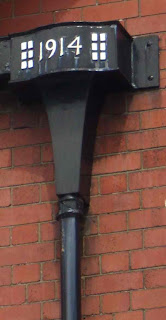 The real ales served today in the Royal Oak are Bass and Greene King Abbot Ale, no locally brewed ales anymore, as Giles and Harrap were bought up by Hancocks of Cardiff in 1936 and the pub is now owned by a pub company. The former Giles and Harrap brewery buildings are surprisingly still standing on Brecon Road in Merthyr Tydfil, though in a sad state of dereliction.

There are plenty of places to sit, both inside and outside the pub and the Royal Oak has its own car park as well.

The outside of the pub is worth a look at as well, the most unusual features being the mythological animals on the roof of the pub. The architect of the pub spared no expense when allowing a sculptor to allow his mind to wander to create the menagerie of mythical creatures that can be seen today.

The Royal Oak is a good example of a Brewers Tudor pub, set in the South Wales Valleys and an unusual and possibly unique survivor with it's etched glass windows and internal features. 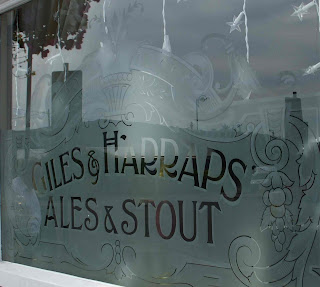