A visit to Hawkshead Brewery

Staveley in the Lake District is easily reached by train from Oxenholme and is on the line to Windermere. 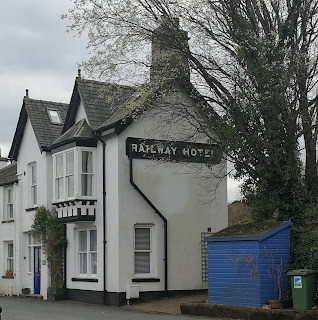 The Railway Hotel is no more, having closed around 2005 but that's no matter, a short stroll downhill from the station is Hawkshead Brewery, housed in a former mill. The brewery was started by Alex Brodie in 2002, just outside of the Cumbrian village of Hawkshead and relocated to Staveley in 2006 with a 20-barrel brewery. The company operates another brewery at Flookburgh, a 40 barrel plant, this expansion was made possible by a £3 million investment from the parent company, Halewood International, who are famous for the Crabbie's brand of ginger beer. Halewood International also own Sadler's Brewery and the chav's favourite sparkling perry, Lambrini. Halewood handle the distribution of Hawkshead beers. The Staveley Brewery specialises in brewing small-scale specialist beers, whilst the regular beers will be brewed at Flookburgh. 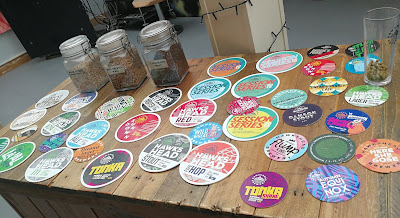 Above: Some of the beers brewed by Hawkshead 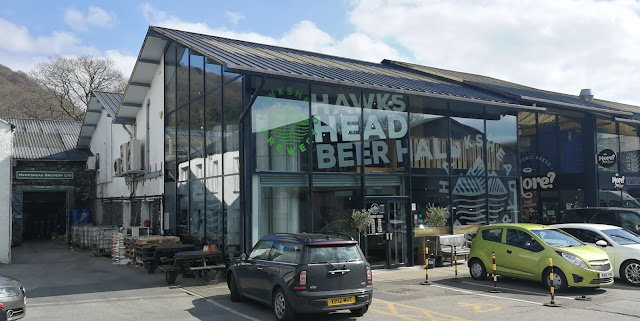 The Staveley brewery has a beer hall attached which is open all day and serves food, you don't have to attend the brewery tour in order to have a drink here, the hall is open to all. 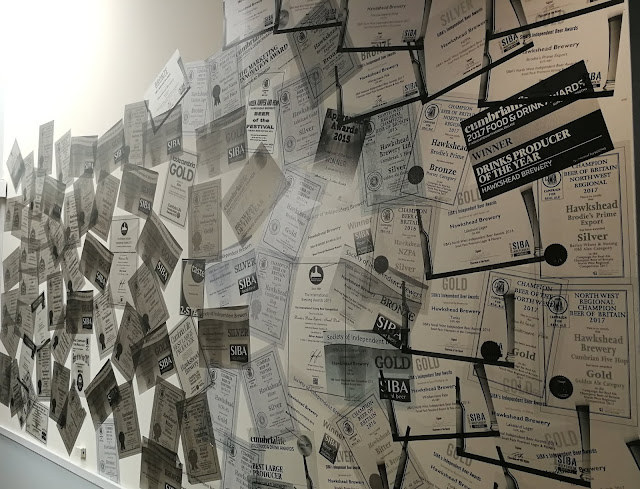 Hawkshead Brewery award-wall is large and impressive
The brewery tour begins with a video and explanation of the ingredients used to brew here. Unusually, possibly uniquely, the water is brought to the brewery via tanker rather than a mains connection. 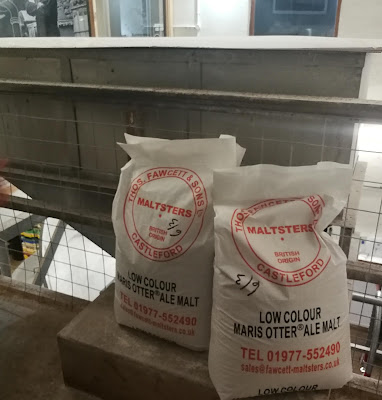 Malt ready to go in the grist case 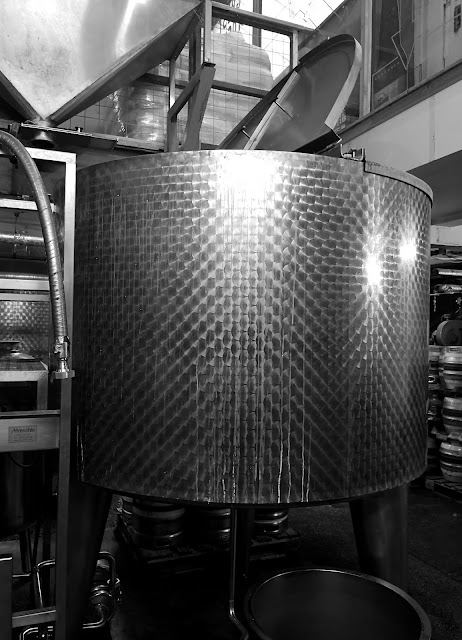 Above: the mash tun 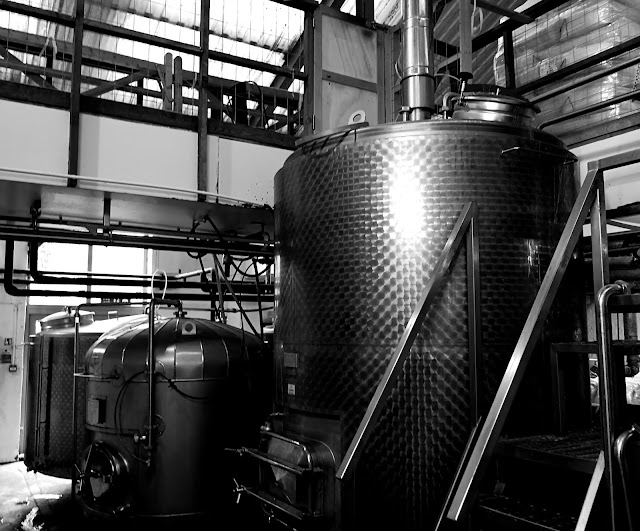 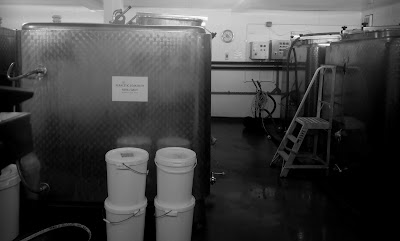 Above: the fermenting room
The house yeast is unique, having been obtained from a now-defunct German brewery, a top-fermenting yeast from a former Kolsch brewer. 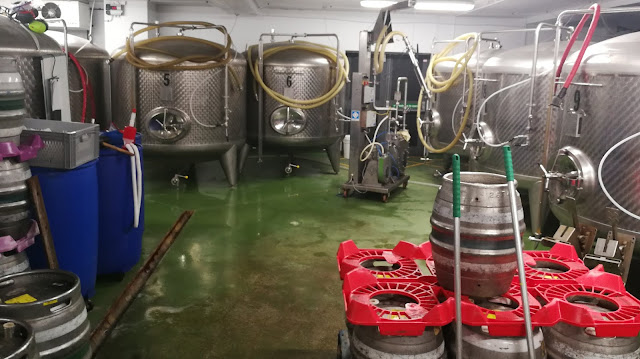 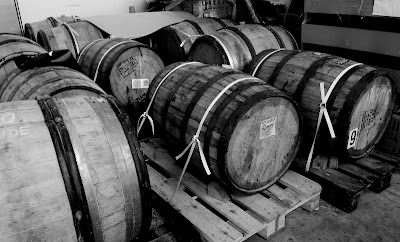 Above: One of their small scale brews, ageing in whisky casks 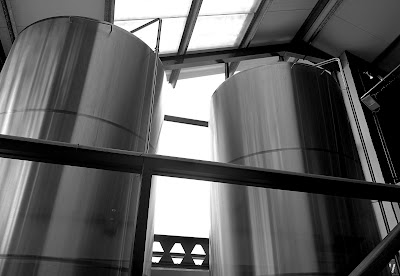 Above: two multi-purpose vessels, can be used for fermenting or conditioning.

Above and below: the range of Hawkshead beers available in their Beer Hall, both cask and keg

The unusual range of beers included a Chuckle Berry Sour, a Berliner Weiss with Chuckleberries, having pressed Chuckleberries and tasted the rather tart cross of redcurrant, gooseberry and Jostaberry (a gooseberry/blackcurrant cross) it was good to see a use for this distinctive fruit.

If you are in the area, make sure to take a trip to Windermere, the next stop up on the railway line, to visit the fantastic Crafty Baa. 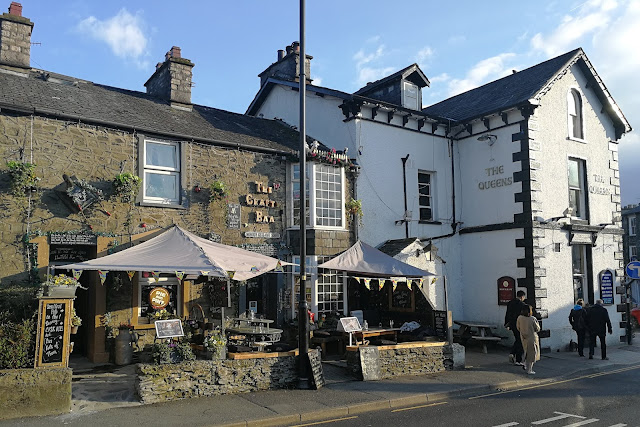 If you're heading the other direction, a short but steep walk uphill from Oxenholme Railway Station is the Station Inn, offering good food and Wifi, the perfect place to spend a couple of hours filling in your refund form online for the trains delayed for over two hours due to a derailment! Thanks to Virgin Trains for a speedy refund though! 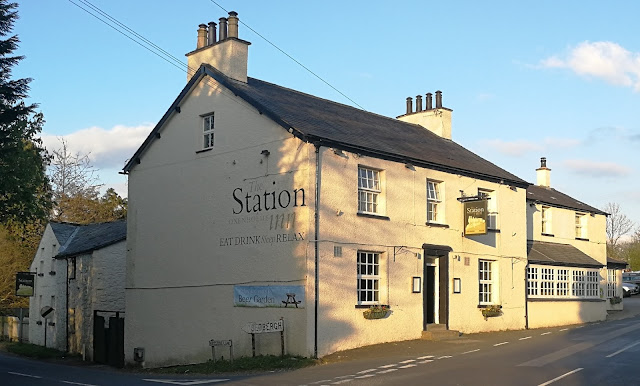