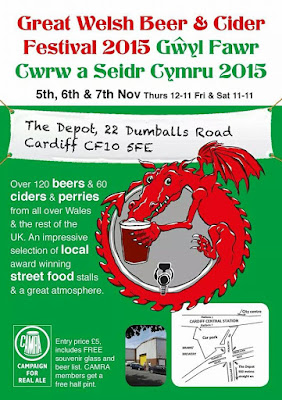 The Great Welsh Beer & Cider Festival, run by CAMRA, the Campaign for Real Ale, returns to Cardiff next week for a 'Back to Basics' beer festival where the quality of the real ales and ciders will be the most important matter, not the egos of brewers pushing out their beers.
Last year the Great Welsh Beer & Cider Festival was a financial disaster when it was held at the Millennium Stadium with the venue proving to be unpopular with hundreds of CAMRA members and the public who all complained about it. Well that's what happens when a bouncer is allowed to run a beer festival!
Well CAMRA listened to the complaints and decided that by moving to the Depot on Dumballs Road, about 10-15 minutes walk from Cardiff Central station we could address all of the complaints with a Back to Basics beer festival. So with that in mind, CAMRA will have