Brewer critical of CAMRA beer festival before it opens! 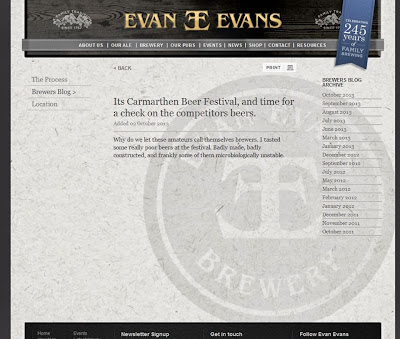 Welll it seems like the Llandeilo Village Idiot is up to spreading his usual lies again, although this time he picks on his local CAMRA Beer Festival via his company website  (screenshot above in case its removed after his meds kick in).

"Why do we let these amateurs call themselves brewers. I tasted some really poor beers at the festival. Badly made, badly constructed, and frankly some of them microbiologically unstable".

Well, in one way it's your own fault for drinking your own beers!

Links to the webpage were posted on Social Media earlier this week and here are what people said,


"I was volunteering at the festival all the open sessions and the statement is simply not true! Full marks for slagging off the event 3 day before they were there!"
"I know actual amateurs who brew much better than Evan Evans"

"Never buying any of his beers again!"


"Outspoken brewers slagging off their competition!.... glad I don't know anyone like that!"
"He wants to be careful, coming from Llanelli and calling others "microbiologically unstable"

"I've had Evans Evans beer. Medicore would be about the best description of Cwrw!"
"Idiot!"
Well there you have it, a round up of what people think of the untrue comments of the Llandeilo Village Idiot, hardly surprising a few years ago a CAMRA beerfestival had to ban him for, amongst other things, "Threatening and violent behaviour". Oh dear, well maybe his behaviour will change when his meds kick in again?

UPDATE:
The post was removed from the Evan Evans website, only to re-appear a few days later with the date changed to the 7th October! Good job we have the screen shot above so everyone can see the bile and lies the Llandeilo Village Idiot spouts!

Love your work, From a soon to be ex manager of EE