It's that time of year when the CAMRA Good Beer Guide is published: 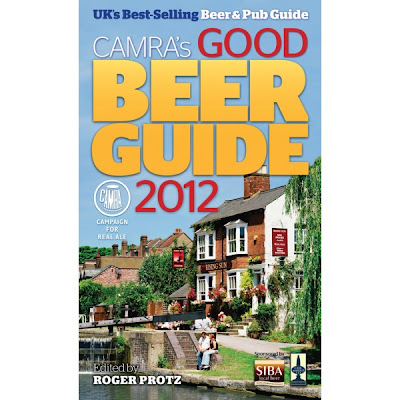 The 39th edition of CAMRA’s Good Beer Guide has today been launched (Thursday September 15th) with the news that the real ale scene in Wales is thriving.
While nationally there are now 840 breweries operational, with 99 starting life over the past 12 months, in Wales there are now 44 breweries, with 3 coming on stream during the same period. These new breweries are Cerddin, Maesteg (Mid Glamorgan), Brecon, Brecon (Powys) and Kite, Gorslas (Carmathenshire).
Today’s research from Britain’s best selling beer and pub guide comes at a time when the number of drinkers around the nation having tried real ale has risen by 40% in just 5 years*.
66 new CAMRA Good Beer Guide pub entries from Wales
As CAMRA’s flagship title, the Guide features over 4,500 urban and rural pubs, giving details of the real ales, food, opening hours, beer gardens, accommodation, transport links, disabled access and family facilities.
The Guide is completely independent, and there is no charge for entry. The Guide is compiled by CAMRA’s 130,000 members, who exhaustively update and revise the Guide each year.
Only pubs serving the best real ale are considered for entry, and this year, 66 new pub entries from Wales have made it into the 39th edition.

According to Ian Hill, CAMRA Wales Director,‘With so many fantastic community pubs in Wales, it is becoming harder every year for CAMRA branches to select their choice of local pubs to feature in the Guide. Only pubs serving a consistently high standard of real ale are considered for inclusion, and it’s been a busy year for CAMRA members surveying their locals. In CAMRA’s 40th year, we hope readers find the Guide as useful as ever in tracking down the perfect pint of real ale.’

CAMRA Regional Pub of the Year 2011
To coincide with the launch of the 39th edition of the Guide, CAMRA has today also announced its 16 Regional Pubs of the Year. These pubs have been hailed by CAMRA’s membership as the very best real ale pubs in the country, and will now go forward in the competition, with the overall National winner to be announced in February 2012.

Wales Regional Pub of the Year 2011-
Ancient Briton
Brecon Road, Pen-y-Cae, SA9 1YY,
A summary of the CAMRA Good Beer Guide description for the Ancient Briton reads-
‘Excellent country inn within the Fforest Fawr Geopark, close to Dan-yr-Ogof Caves and Henrhyd Waterfall, frequently used by walkers, cavers and cyclists. Thirteen handpumps regularly dispense up to six real ales and two real ciders, and an annual beer festival is held in September. Winner of local CAMRA Branch Pub of the Year on three occasions and runner up for South and Mid Wales in 2010.’
Meanwhile, in the Merseyside , Cheshire and North Wales region, another Welsh pub, the Bridge End Inn, Ruabon, Wrexham (LL14 6DA) was crowned winner and will now, like the Ancient Briton go forward in the competition.