A few beers from Jacobi

Just before Christmas at the Caerphilly Medieval Fayre, Brew Wales picked up some beers from the Jacobi Brewery, based in Caio, near Pumsaint in Carmarthenshire. The brewery was founded in 2006 in a converted barn on Penlanwen Farm, close to the Dolaucothi gold mines and a visitor centre is due to open later this year at the brewery. A rare excursion east for these beers and they were very enjoyable. 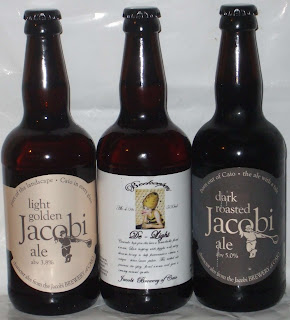 Light Golden Ale, 3.8% ABV. There is a wonderful light golden hue to this beer and a fresh, citrusy, including limes, in the hoppy aroma. The dry, bitter taste, is followed by a some sweetness leading to an increasing bitterness and astringency at the finish. A golden, hoppy bitter, surprisingly packed full of flavour for a beer of only this low strength 3.8% ABV. An excellent match for strong cheddar cheese.
Beekeepers De-Light, 4%ABV. A golden amber-coloured ale with a complicated aroma of floral and sweet malt aromas. As well as the honey imparting aroma, Cascade hops also add to the armoa.
An initial sweetness to the taste is quickly replaced by a subtle but distinct bitterness from the Fuggles hops, added late in the boil. The finish is bitter-sweet with some honey overtones.
Dark Roasted Ale, 5% ABV. This stout is a black beer with an intense aroma of black treacle, liquorice and coffee grounds. A huge roast flavour in the initial taste leads to some hoppy bitterness and astringency in the finish together with dark chocolate and blackcurrant flavours. The roast malt flavours linger in the mouth for a while. 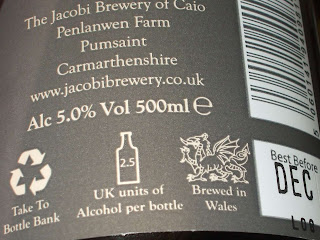 What I did like on the rear of the bottle label was, together with the units BS, the Brewed in Wales logo, not something I have seen on other Welsh brewed beers. Then again do we really want to see that label on Stella and Bud, both brewed in Monmouthshire?