BBC Newsbeat scrapes the bottom of the barrel 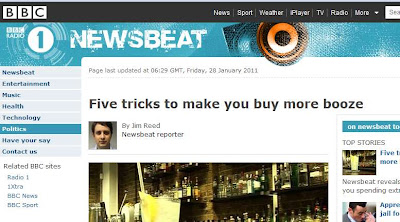 This story from BBC Newsbeat caught my attention today. Not that I would ever listen to Radio 1 but saw a few posts on Twitter about the article and Claire Dodd from the Publican has taken the author of the piece to task over this - it's almost worth following Jim Reed just to see him try and justify his lazy so-called journalism.
Rather than interview people currently working in the industry, Reed decides to go for gossip from obviously disgruntled former drinks industry workers - 'one former manager', 'Former manager Rich', 'one ex-manager', 'one former marketing exec'. Even the interview with one currently working barman is negative about the industry. No fair and balanced judgement in this piece of tabloid journalism which one would expect from the gutter press of Fleet Street rather than the BBC.
Jim Reed you are a lazy, tabloid hack who is unable to write fair and balanced copy or put over anything else but your own negative and twisted views of the drinks industry. Please crawl back under the rock you came from and die.
Some comments from the the Twittersphere have called this article 'Shite' 'Dreadful' etc. Expect more attacks on the drinks industry from the BBC, well done to the Publican and Claire for taking this idiot to task over his appalling piece of so-called journalism.

BBC Newsbeat have put together a 'booze calculator' here - another waste of licence fee payers money.