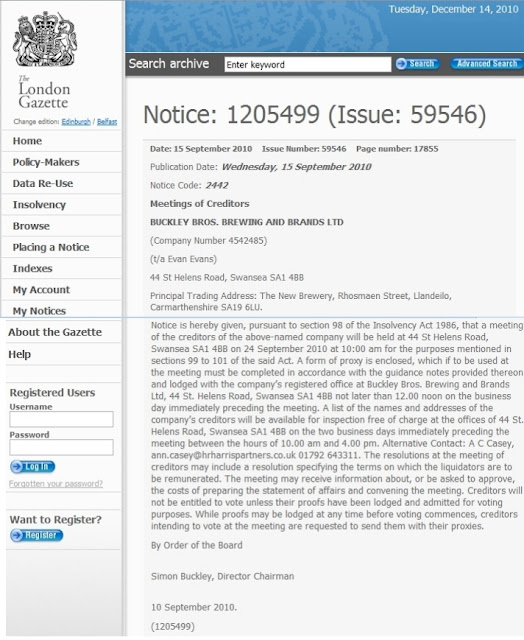 The London Gazette is not on my usual list of reading material but a Welsh brewer sent me this little gem which appears to show the company behind the Evans Evans beer brands has gone into liquidation. Now to those who follow the trials of tribulations of Simon Buckley know that it is no big surprise that another of his companies has gone to the wall yet again.
In what has been described as by the brewery as, "A complicated company restructure", it would appear that the brewery is still brewing, the assets of the Buckley Bros Brewing & Brands Ltd having been transferred to another company before liquidation, in what some might say sounds allegedly like a phoenix company fraud. Now the Brew Wales team are not going to be spending hours going through the various accounts of Buckley Bros Ltd, Welsh Estates Ltd or Beer Brands Ltd or whatever name the brewery is trading under this week, we shall leave that job to the forensic accountants who are no doubt sniffing around the remains of the liquidated company attempting to discover what has happened to investors money.
After the economic failure of Y Cadno, the flagship Evan Evans pub that was situated on Cathedral Road, Cardiff, one can only wonder how much longer this brewery will continue trading under any name. 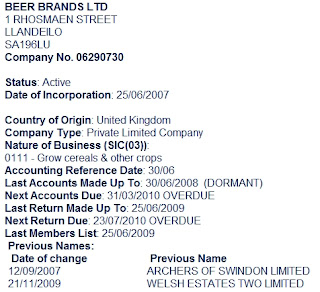 Above: the state of one of Simon Buckley's companies, Beer Brands Ltd, according to Companies House
Below: Welsh Estates Ltd, again from Companies House 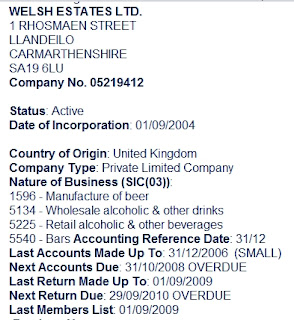 Hardly a healthy state of affairs for any company director to be proud of?
The Brew Wales editor did attempt to contact Simon Buckley at the brewery, only to be told by someone at the plant in Llandeilo that he was out of contact as he was "On his annual Christmas shopping trip to New York"!
Nice for some!

This might explain why I recently had a fellow come round from the brewery offering me beer at a very competitive price with the added bonus of 3-4-2 offer thrown in. Obviously, as it's Evan Evans beer I didn't touch it...

Don't ever let facts get in the way of a good story hay Daley !

Er JB they are the facts and it is a good story!

I'm afraid there not Daley and if you had bothered to do some research, you would be aware of that. I suggest if you want actual facts you should contact Robert Lloyd and whilst your there maybe he can give you some pointer on writing a fair and balanced blog.

Arfur, hate to tell you this but the cricketers is just a new name for the same pub the same rubbish food the same beer.
Its just been rebranded.

I always think of Simon Buckley as a guy whose heart is in the right place and his head isn't. Or maybe I'm wrong?

Would JB actually be a Mr Buckley the cask lifting brewer?

JB or should that be James Buckley?
Robert Lloyd is employed by your family as an apologist, trying to cover up the dodgy business dealings done by Evan Evans Brewery employees.
A colleague of mine did contact him but it was after lunch and he did have a problem understanding a phoenix fraud but instead tried to spin some crap about a new addition to the family.
Would you like to go on the record to confirm or deny that assets were transferred from Buckley Bros Ltd before liquidation?

Whilst I respect everyones, right to freedom of speech is there a particular reason why you feel the need to persicute my family Arfur. Your articles and comments aren’t just gripes at my fathers expense it’s at all of us, it is a family business we all work in it and to the best of my knowledge nor I , my brother or sister have done anything to warrant these types of verbal attacks. They are exceptionally viscous and completely unwarranted

(I've put my name on to this comment to save the guess work!)

Sophy
Would you like to confirm or deny that assets were transferred to another company before Buckley Bros Ltd went into liquidation?
That's not persecution but asking a valid question.
You talk about persecution but it is your family members who have even set up a website to attack me, all because I chose to report the truth about cask thieving and the other unethical business practises carried on by 'thieving gypos' as your father chooses to liken your family to.

Sophy Buckley got pregnant by the chef from Y Cadno, David Humphreys, who she knew full well was in a relationship and had just had a baby with his girlfriend. She got herself pregnant when he tried to break off the affair and destroyed many lives. Good to see the business is doing so well.

Hardly her fault? More likely to be bad parenting and the way she was brought up?