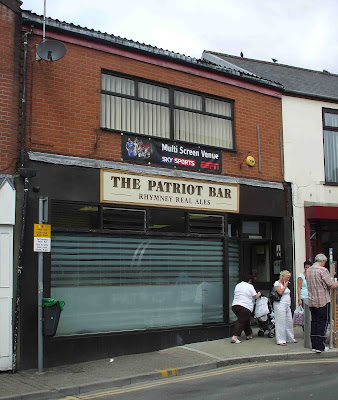 The Patriot, 25a Taff Street, Pontypridd, CF37 4UA
The Patriot is a relatively new pub, having only opened last year and is situated on the main shopping street in Pontypridd. The pub is the second pub to be opened by the award-winning Rhymney Brewery and was converted from retail premises. The pub is a sister pub to Rhymney Brewery's highly successful and popular Winchester pub in Merthyr Tydfil.
The building features a large window and side entrance, leading to a relatively small but extremely popular bar with a row of six shinning brass handpumps on it, all serving beers from Rhymney Brewery.
The Patriot is by a far a drinkers' pub, with no food being served but instead offers six handpumped real ales from the Merthyr-based brewery. The selection of real ales does change but typically features brews such as Hobby Horse, a 3.8% mid-brown coloured ale with a subtle hoppy flavour to the 5% True Taste of Wales award-winning Rhymney Export; with their other ales such as Rhymney Bitter, Bevan's Bitter, General Picton, Premier Lager and Rhymney Dark also featuring regularly along with any seasonal ales the brewery brews. The Dark previously won Champion Beer of Wales at the Great Welsh Beer and Cider Festival which this year will be held in June at the Cardiff International Arena.
The real ales served at the Patriot are poured from gleaming brass handpumps and are served in branded Rhymney Brewery glasses with all the beers in top form here as the Patriot has Cask Marque accreditation. The Patriot also sells the full range of bottled beers from Rhymney Brewery together with their mini-kegs and presentation boxes if you want to take some beer home or make a gift of their beers.
There is plenty of seating around this pub, despite the small size of the Patriot and entertainment is provided by flat-screen televisions that show the latest sports events.  The walls are decorated with old posters and newspapers and there are a number of distinct areas in this pub despite being open-plan. The atmosphere of the Patriot is a lively and vibrant and conversation dominates in this friendly valleys' pub.
The Patriot is an all to rare example of a retail premises converted into a successful and popular pub. The pub may not be to everyone's taste but as an excellent outlet for the award-winning real ales from Rhymney Brewery is certainly hits the mark. The Hobby Horse trademark is certainly roaming the valleys of South Wales once again.