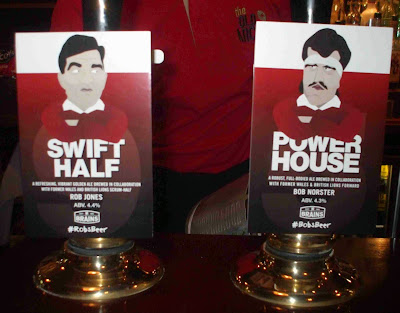 One of Cardiff's most famous pubs has been given a makeover by owners Brains. The Old Arcade in the city centre, which dates from 1844, is now even more rugby themed with jerseys, photographs and other memorabilia adorning the walls. Have previously written about the pub here.
As Brains Brewery says
Celebrating Wales’ national sport, walls will be adorned with match day programmes, exclusive signed and framed shirts, memorable newspaper front covers, and a feature WRU timeline.

Wayne Jones from Brains said: "There are few pubs in Cardiff with more sporting heritage than the Old Arcade. It has long been a favourite with sports fans but these changes mean it will become a true shrine to rugby. It’s the perfect place for rugby diehards and aficionados to gather, get their fix and be inspired by great rugby deeds of the past and present."

There’ll be a new menu, with an emphasis on hearty Welsh food, which includes a signature Celtic Pride ‘black and blue burger’ – created with 100 cap legend and lion, Martyn Williams. And when the pub opens you’ll find two limited-edition beers on the bar, brewed in collaboration with former Wales internationals Bob Norster and Rob Jones.

Powerhouse and Swift Half will go head-to-head and customers will get to decide which beer wins by voting in the pub or on Twitter, using the hashtag #BobsBeer and #RobsBeer.

Had a chance to visit the pub on the re-opening night and had to say my favourite beer was Swift Half, the American and New World hops made it for me.

Also ran into Simon Martin at the pub so we did a couple of interviews there with the rugby legends.